Coal-fired electricity, natural gas, crude oil, nuclear power - by comparison, energy from hydropower appears to be a clean alternative. However, large-scale projects often require huge areas to be permanently flooded. If these areas are full of lush vegetation, as in the Mekong Delta or Amazon Basin, not only will unique habitats be lost, but these large dams can also have a negative effect on the climate.

The reservoir currently under construction on the Rio Xingu in the Amazon basin will be located in the middle of pristine forests that are thousands of years old. With an expected capacity of 11,233 megawatts, the associated hydropower plant will be the fourth largest in the world. In the future, nearly 550 square kilometres of rainforest and arable land will be permanently flooded on the Rio Xingu in Brazil when the reservoirs of the Belo Monte hydroelectric power plant are gradually filled in 2019 (Fearnside, 2015). The Amazon region is one of the most attractive target areas for hydroelectric development planning worldwide, not only here on the Rio Xingu, but also overall (Winemiller et al., 2016).

In Asia, too, a further 140 dams are currently being planned in the Cambodian and Lao Mekong and its tributaries alone (Eyler, 2018). In Ethiopia, the largest dam in Africa, the 'Grand Ethiopian Renaissance Dam', is currently under construction in the Blue Nile. Now, more urgently than ever, the life cycle assessment of the planned dam projects must be comprehensively examined. It is not only adjacent ecosystems and their water balance that can be irreversibly altered. Reservoirs can also have a negative impact on areas far downstream (Assahira et al., 2017). They can also produce considerable amounts of greenhouse gases. In some cases, more greenhouse gases are produced than with comparable energy production from crude oil or natural gas, even for decades after (Fearnside, 2012).

The flooding of forests and vegetation during the filling of reservoirs causes the majority of vegetation to die off, especially when dams are located in vegetation-rich river basins that are not previously cleared. Gradually, all the dead animal and plant material sinks to the bottom of the river, where it settles as organic material and is gradually degraded by methane-forming bacteria. Especially in the years after completion of the dams, i.e. when the surrounding areas - including the biomass - are flooded, large amounts of methane gas can be produced. Methane is always formed when organic matter degrades in an oxygen-poor environment (where there is a lack of ventilation), e.g. in animal stomachs, wet rice cultivation and landfills. The gas has a significant effect on the climate. One tonne of methane in the atmosphere has about 25 times the effect of one tonne of carbon dioxide (Federal Environment Agency, 2019), thus having a greater effect on global warming.

It depends on how well the water basin is ventilated. If the sediment is well oxygenated, carbon dioxide is produced; if there is a lack of oxygen, however, methane, which has a much greater effect on the climate, is produced. However, oxygen depletion often occurs at the bottom of the water body, which means that anoxic conditions can be found. This is also due to the fact that the settling particles gradually build up cohesive sediment layers. Worldwide, sediment layers more than 15 metres thick pile up in reservoirs of over 57,000 large dams (article: Rivers in Crisis). If all planned dams in the Mekong Delta were implemented, for example, sediment loads could be reduced by 90 percent (Apel, 2015). These sediments would be trapped in reservoirs and thus in the upper and middle reaches of rivers. Thermal stratification in reservoirs also often prevents mixing of the water and thus aeration of the bottom of the watercourse.

Under these oxygen-poor conditions, the decomposition of organic material at the bottom of the reservoir only takes place when the climate-impacting gas methane is released. Part of the methane rises to the surface of the water in gas bubbles and is thus released into the atmosphere. Indeed, the methane gases produced were previously referred to as 'marsh air'. In total, these are considerable quantities, much more than would be released into the atmosphere by a naturally flowing river. Greenhouse gas emissions from dams are not constant and have been shown to vary. They depend on the temperature, solar radiation and physico-chemical and biological properties of the water (Fearnside, 2008).

As the age of the reservoir increases, carbon in the sediment becomes increasingly important as a source of greenhouse gases. Flooded reservoirs are therefore a potential source of methane for many years and subsequently of carbon dioxide. Reservoirs in the northern hemisphere are more likely to contribute to global warming through carbon dioxide, while tropical reservoirs add methane.

One measure to reduce emissions is particularly effective: removing vegetation before flooding an area of land reduces the content of organic matter in the soil. As a result, less methane is produced. In hydropower plants that have already been built, aeration of the soil sediment should be promoted. In addition to these factors, there are other circumstances related to dams that contribute to the increased release of climate-impacting gases into the atmosphere.

At dams, water usually flows off through ship locks or turbines. This agitates the water, causing turbulence, mixing and local pressure fluctuations in the water. As a result, increased exchange with the atmosphere takes place. This also explains the higher emissions of a dammed water body compared to the surface of a naturally flowing water body.

Water vapour is also a (natural) greenhouse gas. Estimates for 2010 indicate that a total of almost 346 cubic kilometres of water evaporate from reservoirs (FAO, 2016), amounting to three-quarters of the amount of fresh water consumed by mankind in all cities of the world within a year (FAO, 2016). In principle, stagnating bodies of water - in this case the huge areas in reservoirs - are warmer than the river that once flowed here. The larger water surfaces are exposed to air and direct sunlight, which promotes evaporation. Overall, a dry region also 'loses' a lot of water through evaporation due to dams. This is particularly problematic for arid or semi-arid regions that do not benefit directly from dammed water. 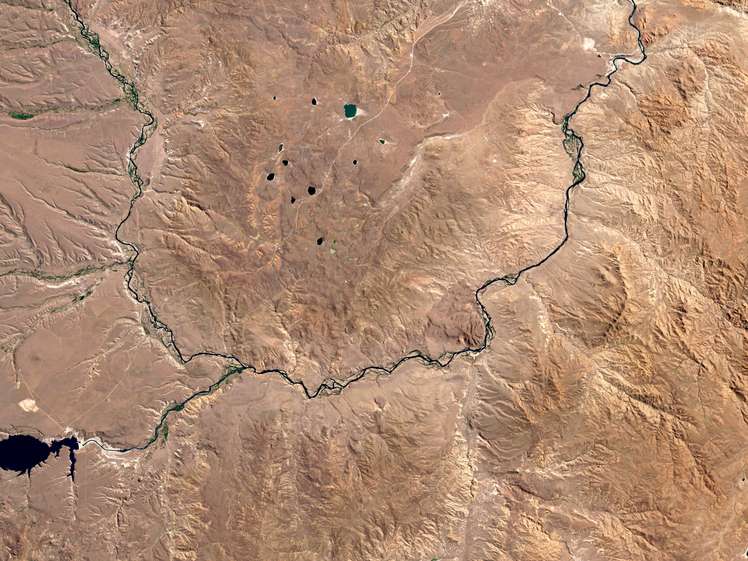 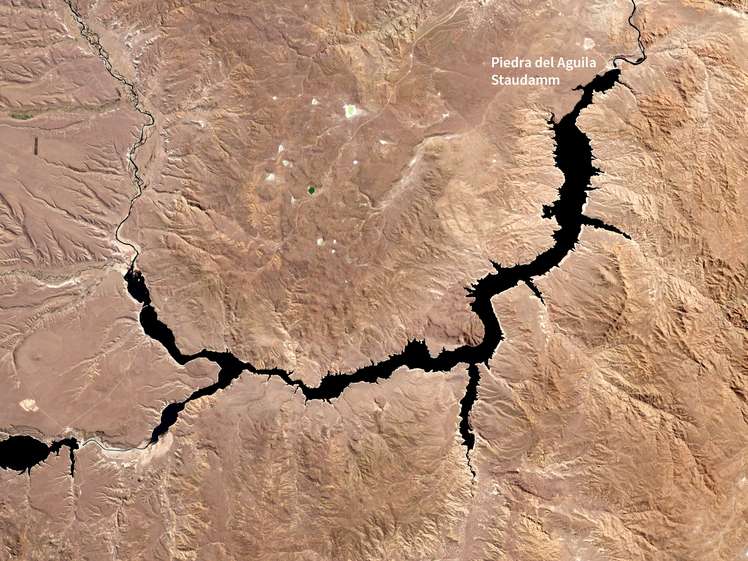 Changes to a water supply can trigger various social issues, as an example from Ethiopia shows. The colossal Ethiopian project, 'The Grand Ethiopian Renaissance Dam' will have an impact on the states along the lower reaches of the rivers Blue and White Nile. Almost 60 percent of Egypt's water  comes from the Blue Nile (Tawfik, 2015). For decades, Ethiopia had not dammed its rivers out of consideration for its neighbours Sudan and Egypt and had hardly diverted any water for its own use. However, 83 percent of the Ethiopian population is still without electricity. Africa's largest hydroelectric power plant in the Blue Nile is to be completed by 2022, initially without reaching any agreements with neighbouring countries (Tawfik, 2015). Egypt is now desperately seeking mediation with Ethiopia through the World Bank (Maasho, 2018).

After completion, it will take many years for the Grand Ethiopian Renaissance Dam to fill completely with water, depending on rainfall. Eventually, water will be retained and partly evaporated, while the lower reaches of the river will be depleted, accordingly. Another comparison illustrates this: The storage volume of the 'Grand Ethiopian Renaissance Dam' of 74 billion cubic metres corresponds to about 1.5 times the average annual flow of the Blue Nile at the Sudan-Egypt border (Tawfik, 2015). In the worst case, water for irrigation and the natural floods, which transport nutrients, will also be negatively affected.

However, depending on the climate zone in which a reservoir is located, it may be necessary to consider the situation with from a different perspective, namely whether vegetation and land areas as a whole release more moisture into the atmosphere (evapotranspiration) or the open water area (evaporation). In the humid tropics, for example in the Amazon Basin, the rainforest evaporates considerably more water than an open water surface. Reservoirs significantly disturb the water cycle and make the local climate drier. The Mekong region experiences a similar effect. Overall, taking into account the flooded vegetation, it is likely that reservoirs in the humid tropics will tend to reduce evaporation.

So far, there are only rough estimates of the total evaporation rates of dams worldwide. For all dams (here: 14,200 dams for 157 countries), the global estimate was 865 cubic kilometres per year, provided they are filled to capacity. The scientists of the Food and Agricultural Organisation (FAO) of the United Nations, however, actually base their calculations on half-filled reservoirs and thus arrive at the figure of 346 cubic kilometres of water evaporation per year. There remains great uncertainty due to a lack of data, however one thing is certain: in arid regions, evaporation could be a considerable problem, which has always been the case for dam operators.

There are many reasons to build dams and reservoirs in addition to generating energy: for irrigation, drinking water supply, flood protection, navigability, recreation, environmental protection, livestock breeding and others. The bottom line, however, is that the irreversible environmental damage is immense and it remains questionable how favourable the cost-benefit calculation for society will actually be in the long term. In addition, some dams are located far away from industrial centres, which are supposed to supply them with energy: electricity must then be transported over thousands of kilometres, which entails further high costs and transmission losses. 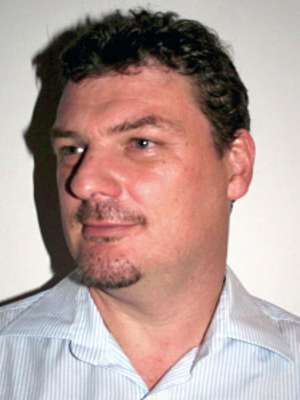