Whether geotextiles, disposable coffee cups, shop receipts or insecticides, they all have something in common. A conversation with Prof Ralf Ebinghaus, head of the Environmental Chemistry Department at the Helmholtz-Zentrum Geesthacht.

Whether disposable coffee cups, Teflon pans or insecticides – as well as many other products – they all may contain industrial chemicals that are classified as persistent organic pollutants (POPs). A global agreement was reached through the Stockholm Convention, which went into effect in 2004, to initially ban twelve particularly dangerous POPs. Many pesticides were among those chemicals, also known as the “dirty dozen”, which, nevertheless, had virtually no economic relevance even back then. More chemicals were later banned. The industrial sector moves quickly, however, as there is a great need for industrial chemicals that provide our products with more desirable properties.

Substitutes for dangerous substances continually come on the market, sometimes in much larger quantities. What new substances should we count on today?

Part 2 of the interview with Prof Ralf Ebinghaus, head of Environmental Chemistry Department at the Helmholtz-Zentrum Geesthacht, Centre for Materials and Coastal Research, deals with novel flame retardants, polyfluorinated compounds and other critical, persistent substances.

10. Where do the persistent organic substances that cause you concern today originate?
Prof Ralf Ebinghaus: We can’t select any area. The OECD says that approximately 100,000 chemical substances are in circulation. That means we need to deal with a large number of substances on a daily basis. The European Chemicals Agency estimates that approximately one to three percent of those will be problematic. That will cost us a great deal as a society.

We assume there are approximately 50,000 products in the pharmaceutical sector, with approximately three thousand active substances. Then we have a huge area that I believe is underestimated: cosmetic products. Cosmetics, perfumes, fragrances, etc. are used in enormous quantities. We have relatively little idea how many substances we're really dealing with. Then we have about eight hundred pesticides and surfactants, and we have the industrial chemicals, which are reasonably well regulated.

11. Are there examples of novel POPs?
Ebinghaus: An example of novel persistent organic pollutants are the poly- and perfluorinated compounds (PFCs). Every one of us has probably come into contact with them at some point. Here we’re talking about surface-active substances, which, for example, are used in outdoor clothing, disposable coffee cups and Teflon manufacturing as well as in fire extinguisher foams. The two main substances (PFOS and PFOA) are extraordinarily stable and accumulate extremely vigorously in the living environment. We’ve seen in seals of eastern Greenland that the concentrations can increase in the body by eight percent per year. That’s enormous. These compounds were so persistent and so bioaccumulative that the PFOs were banned within five years.

12. Can you give additional examples of products that followed?
Ebinghaus: Legislation, for example, requires that certain everyday products, such as computer monitors, televisions, furniture or drapery, must maintain a defined fire resistance standard. They must withstand high temperatures for a certain amount of time before they themselves catch fire. This standard is achieved using what are known as flame retardants. The most important brominated flame retardant is or was the PBDE substance group. These substances have been banned since 2009.

The necessity, however, still exists and the fire resistance regulations for consumer goods haven't changed. The manufacturers then resort to unregulated alternative flame retardants. There are very concrete examples with organophosphoric acid esters or a compound such as Dechlorane Plus. We’re simply taking an admittedly very problematic, but well-studied group of substances out of circulation and replacing them with an incalculable number of substitute materials that we know almost nothing about in terms of environmental relevance.

13. When looking at chemical functionality, what do you see as the most critical?
Ebinghaus: In terms of quantity, it's definitely the flame retardants. What still really astounded us scientists, however, is the rapid rate at which the polyfluorinated substances accumulate in the environment. Those are high-performance chemicals that are used, for example, in the textile industry. The problem we have, however, is this: who wouldn't like to have a waterproof, dirt-repellent jacket that’s also breathable?

14. Have you already researched these questionable replacement substances?
Ebinghaus: Our own studies in my Environmental Chemistry Department showed that the alternative flame retardants are also distributed over a large range and are detectable in the marine and polar environments. Dechlorane Plus is a particularly striking example for me here. It was actually developed as a substitute for the highly effective insecticide Mirex, which has been banned by the Stockholm Convention. So, we are dealing with a twelve-fold chlorinated cyclo-aliphatic insecticide that is used today as an alternative flame retardant. And we are doing so simply because it’s not regulated. From the view of an environmental chemist, this situation is hardly bearable.

15. What studies have already been carried out on these likely environmentally damaging flame retardants?
Ebinghaus: In cooperation with AWI and the Polar Research Institute of China, we could already show that Dechlorane Plus can be found throughout the Atlantic and Pacific atmosphere between the Arctic and Antarctic. I am certain that Decholorane Plus is not a suitable alternative flame retardant, but rather that it will be a candidate for the Stockholm Convention’s banned substance list.

16. How much flame retardant is there on average in products?
Ebinghaus: Flame retardants (PBDEs) are additives. This means they do not form a chemical compound but are simply mixed in. This also means they can easily be released. In terms of total weight, they make up five to twenty percent of the product. That’s really a lot. The polyfluorinated compounds that possess water, dirt or oil repellent properties are applied as a coating or directly to the textile. If we now use substitutes, then they no longer possess these unusual properties. We must therefore use substantially more of the compounds to obtain the same functionality.

17. What trends have you noticed?
Ebinghaus: We’re seeing production outsourcing, mainly to China. There is a shift to unregulated, supposed alternatives. We know virtually nothing about the environmental behaviour of some of these substitutes.

The trend is also perhaps that we're finding rather more polar molecules. In principle, they are rather more water-soluble, somewhat better at degrading, but we also see substitutes that are completely similar to their banned precursors in structure. These substances will hardly differ in terms of their problematic environmental impact even though they are supposed substitutes. An example can be seen with flame retardants: here we have Dechlorane Plus. As chemists, we look at the molecule and it makes us shiver. It’s clear that this compound degrades extremely poorly.

Prof Ebinghaus, thank you for the interview.
The interview was conducted by ESKP – Jana Kandarr.

Go to Part 1 of the interview.
View the complete interview in PDF format (500 KB, german) 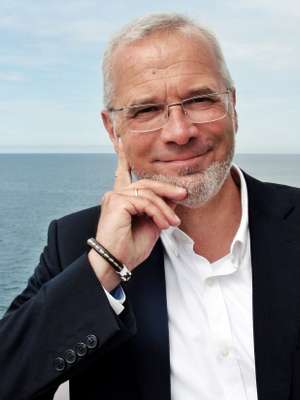 So what can your outdoor jacket do?
The North Sea is no longer a natural sea