Volcanism in Iceland: sediment cores as a geological archive

What risks do Iceland's volcanoes hold for Europe? To answer this question, researchers are examining sediments taken from the sea. 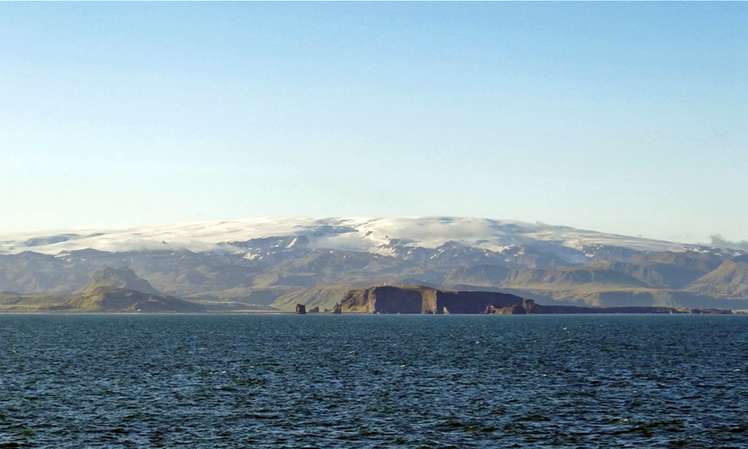 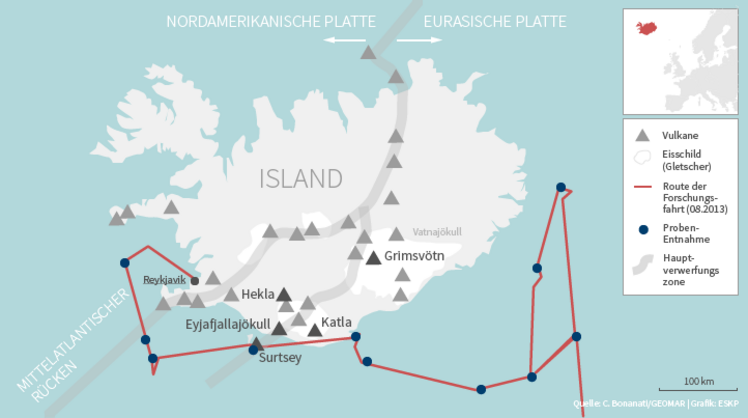 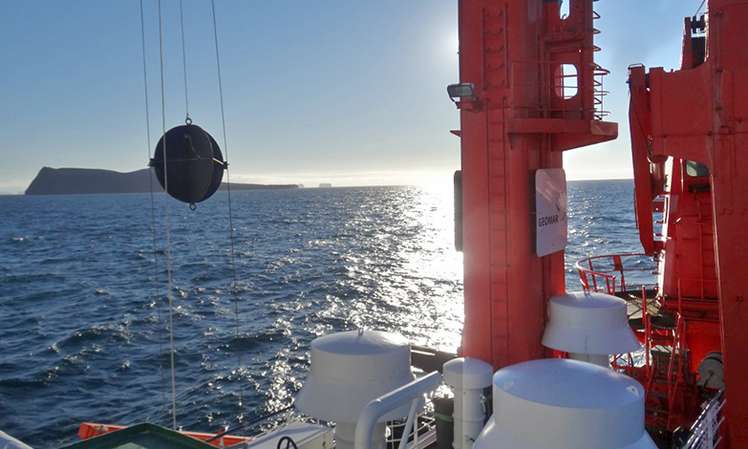 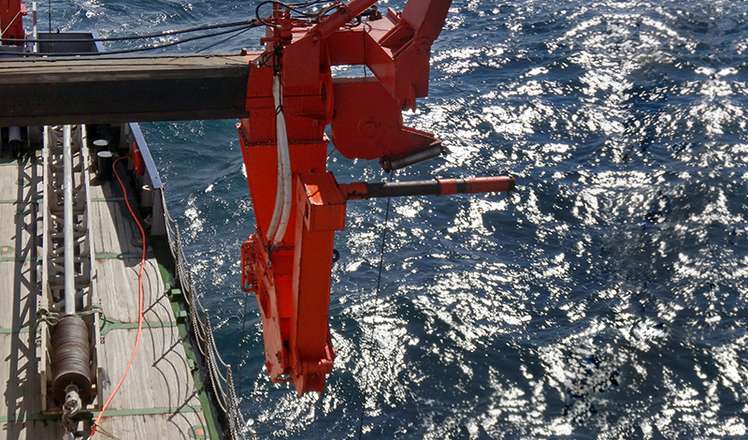 In April 2010, Iceland's Eyjafjallajökul volcano erupted and paralysed air traffic in wide areas of northern and central Europe. Geologist Christina Bonanati from the GEOMAR Helmholtz Centre for Ocean Research in Kiel is studying the ash layers on the sea floor off the southern and eastern coasts of Iceland. Here lie the deposits from the volcanic eruptions of the past 100,000 years, the ashes of which were carried towards Europe, and so too those of the volcanic eruption in the spring of 2010.

Scientists at GEOMAR have set themselves the goal of being able to assess the possible impacts of Icelandic volcanic activity on Europe more effectively: how many volcanic erup¬tions occurred in the past, in which volcanoes, how strong were they? Is their frequency influenced by the melting Icelandic glaciers? To find the answers to all these questions, twelve GEOMAR scientists set off on an expedition aboard the research vessel Poseidon in August 2013.

The researchers obtain essential information from sediment cores taken from the sea floor. How are they used as a geological archive? "During explosive volcanic eruptions, a cloud of volcanic ash is produced. It contains very fine glass and mineral particles that are blown by the wind in different directions", explains Bonanati. Sooner or later these particles, called tephra, fall down and are deposited across wide areas on land and in the sea. There, they sink to the sea floor where they remain relatively undisturbed.

To obtain these samples, a plastic tube with a metal sheath is driven into the seabed by a corer weight weighing several metric tons. The tube fills up with sediment material such as sand, clay or volcanic ash, much like a drinking straw that has been pushed down into sand. The up to ten metre long sediment cores contain deposits and therefore information from the last 100,000 years. They represent a geological archive. For closer examination, the cores are sawed lengthwise into two pieces: apart from organic ingredients such as shells, they also contain a lot of tephra, i.e. volcanic material. "Depending on the strength of the volcanic eruption and the nature of the material, thick ash layers of more than 10 cm can form and are therefore even visible to the naked eye", says Bonanati. "Some, however, are so finely dispersed that they can only be identified by means of precision analysis methods." The sediment cores are therefore sampled at intervals of some centimetres.

The GEOMAR PhD student examines the chemical composition of the ash particles with the electron microprobe. A geochemical fingerprint is generated from the measurements for each type of tephra, so that it can be assigned to a specific volcano, volcanic system or eruption. As a result, the ash deposits from volcanic eruptions that took place thousands of years ago can be identified. The ash particles were deposited not only on the sea floor, but also on Iceland itself and even in Europe. In these locations they were identified, for exam¬ple, in bogs or in lake sediments, and accurately dated. "I compare my results with the analysis data for other deposits", explains Bonanati. "If the geochemical fingerprint of an ash layer coincides with that of a previously studied ash layer, this suggests that they belong to the same volcanic event." Some major volcanic eruptions have left widespread traces. These ashes form useful fixed points in the sequence of eruptions and help in particular to better assess the temporal context. Such layers are called marker horizons. When many ash particles and ash layers have been studied in several sediment cores and identified by means of their chemical composition, their distribution and thickness are then also considered. From this data and the information gained in studies conducted by other scientists from other localities, the GEOMAR researchers derive the dimensions of past volcanic eruptions and draw conclusions as to how the ash clouds have spread out. By combining these observa¬tions, they can determine the extent to which the frequency and intensity of volcanic erup¬tions in the Earth's development have changed to this day.

In this way, the GEOMAR researchers wish to record the development of Icelandic volcanism accurately and completely. On land, a lot of deposited volcanic material has already been worn away. On the sea floor, however, it is still preserved. It consequently may soon be pos¬sible to answer the question of a change in eruption frequency since the last ice age more precisely with the help of the sediment cores from the sea. Scientists suspect that the melt¬ing of the Icelandic glaciers leads to the increased frequency of volcanic eruptions. However, this hypothesis has not yet been confirmed. In the case of continued global warming, this would lead to a further increase in volcanic activity in Iceland, which could then also affect mainland Europeans in the form of an increase in events, such as the volcanic eruption in 2010.

The video of GEOMAR TV episode 4 is a report about the research cruise of RV Poseidon offshore Iceland (at 16:00 min.). Geologists are taking sediment cores from the ocean floor to learn more about past volcanic eruptions.

Volcanic ash in the sea - a valuable source of information