By flying only 70 meters above the lava field scientists surveyed the Bardarbunga eruption progress. 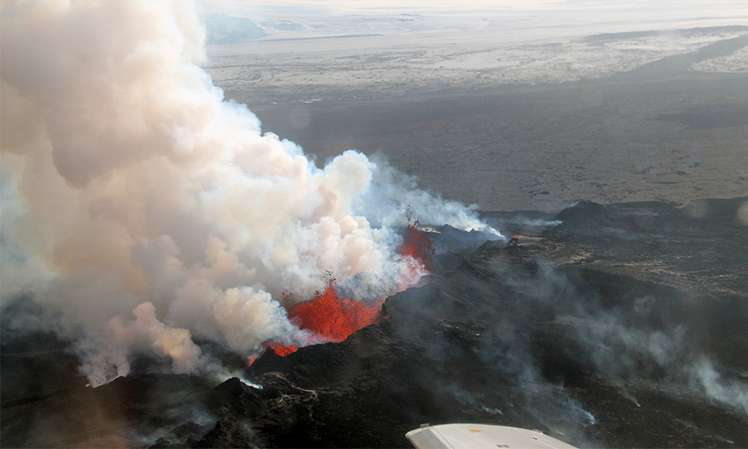 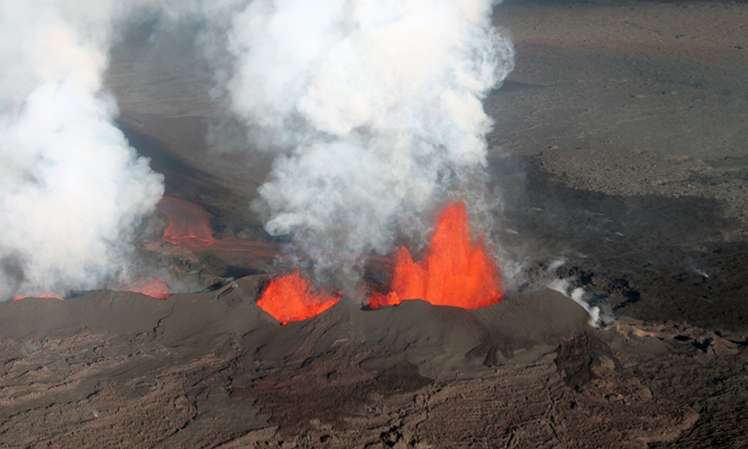 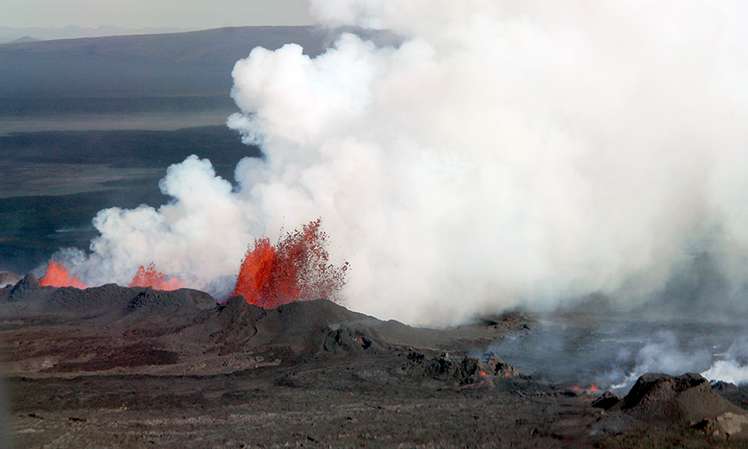 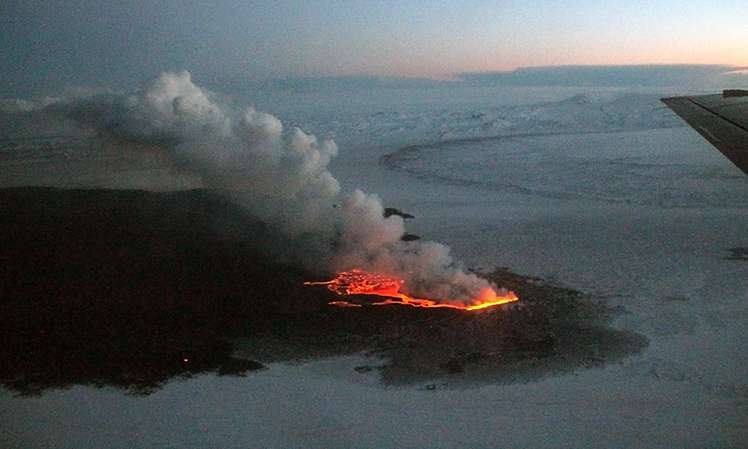 Originally, the German researcher Tobias Dürig came to Iceland to develop a monitoring system and network for Icelandic explosive eruptions. The eruptions of Eyafjallajökull in 2010 and Grìmsvötn in 2011 clearly revealed how strongly Europe is exposed to such volcanic hazard. Integrated in the EU project “FUTUREVOLC supersite”, Tobias Dürig models ash emissions and dispersal, aiming at improving the forecast for the case of upcoming eruptions.

In order to be able to make decisions concerning aviation closure during an explosive volcanic eruption, it is important to assess the mass eruption rate of the pyroclastic material as well as the height of the eruption column as quickly as possible. When Eyjafjallajökull erupted in 2010, this estimate took too long and was fairly imprecise. Also threshold values for acceptable ash concentrations were not yet determined. To prevent any risk, the air space was closed more comprehensively than needed, resulting in unnecessary economic loss.

There are a variety of means to measure the mass eruption rates. Data are collected through space, airborne and ground-based monitoring systems. Being a physicist, Tobias Dürig has the expertise to comparatively evaluate the different measurement systems and to discover their weak points and error sources. Which system can we trust the most? “I evaluate these data statistically and from that develop an assessment-system on the meta-level,” the scientist explains. In the case of an explosive eruption, the Volcanic Ash Advisory Centre (VAAC) should be provided with information, which they can then make available to the authorities who make the decisions on airspace closure. Such systems and sensors include Webcams, X-band Radar, infrasound, lightning sensors, electric field sensors (assessment of the mass eruption rate by triboelectricity of the ash particles), as well as gas sensors. Additionally, tephra traps are installed as automated sampling devices. Cameras from colleagues of the German Research Centre for Geosciences (GFZ), equipped with electric sensors, can make high-resolution pictures of the ash plume. When this is done simultaneously from different perspectives during an eruption pulse, the volume of the eruption plume can be estimated. Its temperature can be determined via infrared cameras.The EU-project prioritizes those volcanoes with the highest threat of an explosive eruption: Hekla, Eyjafjallajökull, Katla and Grìmsvötn.

But then the eruption of Bardarbunga began

But then the eruption of Bardarbunga began, which was suspected to develop from an effusive to an explosive eruption. The sensors and monitoring-systems had to be shifted from other volcanoes to Bárðarbunga. If the eruption had evolved to an explosive one, the emergency system would have been readily installed.

But now the first priority was to observe and document the ongoing eruption as accurately as possible. The magma discharge rate was quantified as the eruption progressed. The scientists determined the spatial distribution and the thickness of the outflowing lava to constrain its total volume. The aerial extent of the lava-flow field can easily be obtained by satellite images. The thickness on the other hand is difficult to measure. As the remote parts of active lava fields are inaccessible and from the edge of the lava field, the thickness in the interior parts can only be extrapolated or estimated.

Flying only 70 meters over the lava field

For this reason, Tobias Dürig and his colleagues flew with a small plane, which was equipped with a ground-clearance radar coupled with a kinematic GPS altimeter, at low altitude (up to 70 m) over the active lava field. In this way, the scientist obtained geo-referenced height profiles of the surface of the lava-field. The flights were carried out by the Icelandic national airport and air navigation service provider (ISAVIA) and their well-trained pilots.

On different days, profiles were repeatedly flown over the lava-field. the area in between was interpolated. From the different topographic heights along the profiles, the lava volume was obtained.

For ground-truthing, a team of scientists followed one of the profiles on foot on a lava field that had been inactive for several weeks and had already formed a stable surface crust. They were equipped with a transportable kinematic GPS, with which they were able to establish an exact elevation profile. The same profile was taken from a plane at the same time, usinga radar altimeter. Surprisingly, a systematic offset of 3-4 meters was observed. This was only for the lava-field and not the surrounding area. It can best be explained by the rugged surface of the lava-field, which gives rise to reflections of signals and leads to scattering. However, as the error is systematic, this strongly helps to evaluate the dataset.

During the low-level flights, Tobias Dürig took videos, photos and thermal infra-red images of the eruption site through an open window from the baggage compartment.  Often the lava flows through the inside of lava tubes. At many sites, holes form in the surface, providing windows to observe the flowing lava with the infrared measurements.

Moreover, flights over Vatnajökull were taken for the inspection of the glacier. Can subsidence of the caldera be observed? Are any new cauldrons to be seen in the ice? These would indicate melting underneath the ice, accompanied by the possibility of a glacial outburst flood (Jökulhlaupt) occuring. Since this would affect also the offshore areas, the coastguards willingly provided airplanes for the surveillance. During the eruption of Bardarbunga, the ice shield inside the caldera indeed subsided. However, this was in fact due to the removal of magma and not a glacial collapse. Because no hot melt reached the surface underneath the glacier, no melting of the ice occurred and subsequently there was no flood.

As many scientists wanted to take every opportunity to obtain photos etc. of the eruption site, there was at first a rush on the available spots in the airplanes and helicopters. Indeed, most scientists flew only one time. “Due to the thermal effects it can get quite turbulent in the plane. You already feel this when reaching the margin of the lava field”, Dürig reports and adds: “That didn’t agree with most people.”  He himself however enjoyed every flight and thus was on board the small machine 24 times with such colleagues, including for example Professor Magnús Guðmundsson from the University of Iceland and the team from the Icelandic Met Office over Holuhraun (or Nornahraun). The Icelandic scientists could not yet decide on a name for the new Lavafield. Rhaun is Icelandic for Lava, Holu means hole and Norna is a witch.