Landslides and Tsunami at Etna

Scientists from Kiel are installing a system to measure deformation at the volcano’s flank. 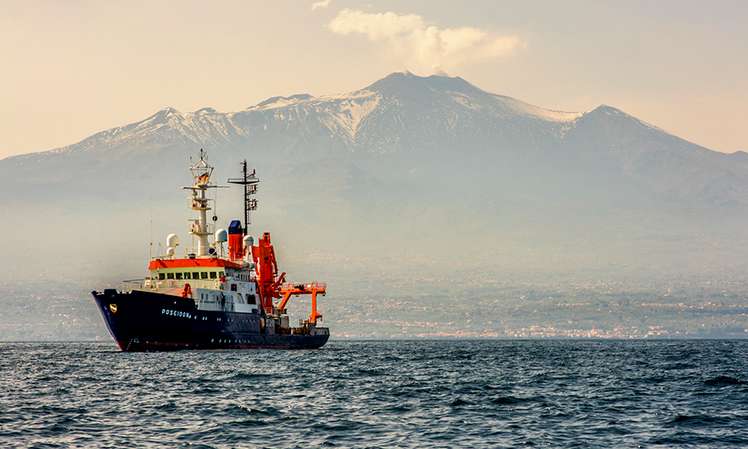 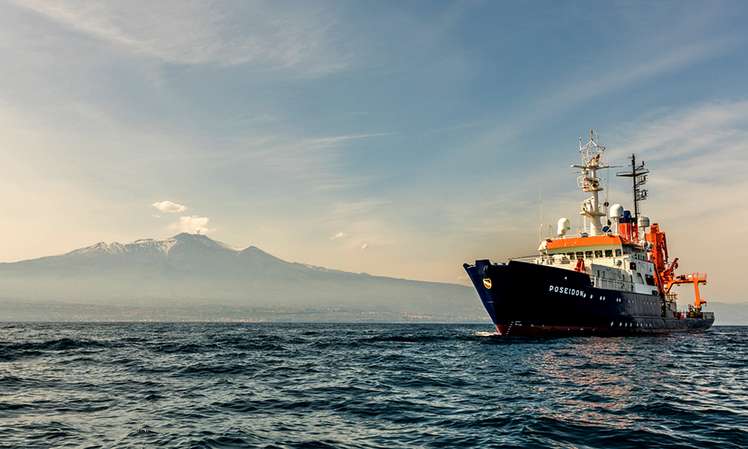 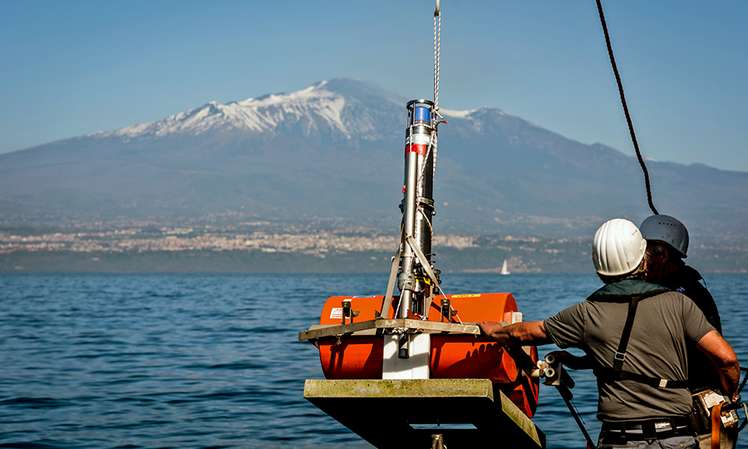 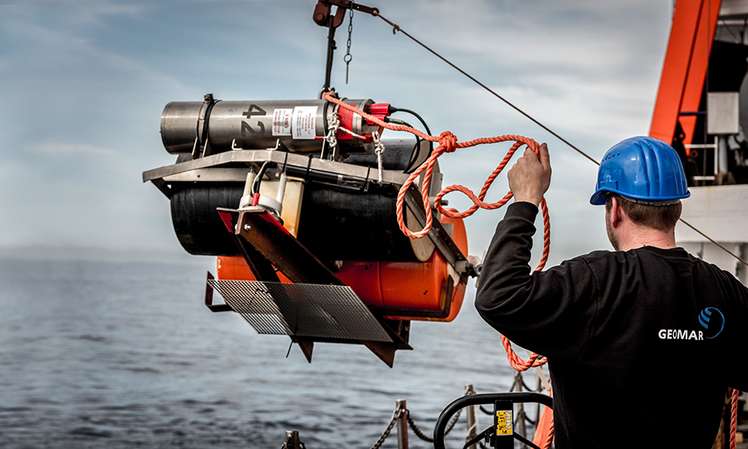 Onshore, instabilities of Etna’s eastern flank are well documented by remote sensing methods. Up to now however, little is known about how the connected fault system and the instable flank extend underneath the water surface. To find out more about the active faults of the continental slope, from 24/3/16 to 4/4/16, Scientists from GEOMAR, Helmholtz Centre for Ocean Research, Kiel, installed a measurement network at Sicily’s east coast.

Mount Etna is the largest active volcano in Europe. Since this millennium it erupted seven times. The last strong eruption was in December 2015. Strombolian activity at the summit and devastating lava flows threaten humans and infrastructure. Onshore the deformation of the volcano and the moving flank are monitored via satellite GPS and Interferometric Synthetic Aperture Radar measurements (InSAR). Electromagnetic signals, as they are used by satellites however, do not penetrate water. “Up to now it was difficult to measure movements and deformation of the ground under water. We are using a sonar-based alternative which opens up new ways to investigate natural hazards in the ocean”, explains project leader Dr. Morelia Urlaub from GEOMAR.

Why is the volcanic flank moving?

There are various reasons and hypothesis. The slope inclination of the Etna’s eastern flank is approximately 10°. Locally the slope moves up to 50 mm per year. These rates are not steady. There is a constant moving rate which occurs continuously. During volcanic eruptions, episodically, higher sliding rates may occur. The submarine realm of the volcano flank is characterized by different blocks which are controlled by local and regional tectonics. The collapse of a large area at the toe of the flank may have caused gravitational instability of the flank, as the supporting mass at the lower area is missing. Additionally Etna’s magma chamber is not located directly underneath the summit but further to the east. During eruptions it expands, causing steeper slope inclinations at the flank. Another presumption is the existents of a clay layer on which the area of the flank glides.

At the southern boundary of the moving flank, there is evidence of an offset which is caused by a right lateral oblique fault. Information about it are however restricted to the onshore part of the fault, although the volcanic flank extends far into the Ionian Sea. To determine the sliding rates under water, at each side of the fault three geodetic stations were installed. A transponder emits acoustic signals- "When many of these devices communicate with each other, their position is determined by the run-time of the acoustic waves at accuracy to within a centimeter. From the run-time changes of the sonic waves we can calculate their relative movement." explains Morelia Urlaub. Because the devices are on one side installed on the sliding flank and on the other side on the assumed stable part of the slope, the relative sliding rate of sliding part of the flank can be determined. With pressure sensors on the devices, also the vertical offset can be determined. Moreover, Ocean bottom seismometers (OBS) were installed on the ocean floor. They will exactly localize hypocenters of local earthquakes to assess the correlation between deformation and seismicity. In a different area where the flank is segmented at an extending fracture zone, three tiltmeters were installed at the ocean bottom. With Inclination measurements internal deformation at the volcanic flank can be recorded.

During the research cruise of Poseidon from 24/3/ to 4/4/16, these devices were installed at water depths of 700 to 1,200 m. Within the next three years, they will collect data at the ocean floor which can be retrieved from the ocean surface. This will first be done in September 2016.

Due to the instabilities of the volcanic flank, there is a chance of a landslide into the ocean which may then cause a tsunami. In the future, the measurement network could be used as an early warning system.