The alluvial soil in coastal plains can barely stand up to the pressures of groundwater extraction. But this is not the only reason that cities are sinking.

At this time last year there were areas in Jakarta that were 15 centimetres higher than they are now. One reason for this lies in the enormous amount of groundwater being pumped to the surface. This alters the pressure balances underground and can cause the ground to sink. This may occur almost unnoticed, but it can also happen very rapidly – in extreme cases at rates of up to 30 centimetres a year. Such land subsidence is above all affecting megacities located in river deltas or in coastal plains. Many people are already aware of the danger posed by rising sea levels. But local ground subsidence may prove to be a much more threatening scenario, since it involves more than just an increased risk of flooding.

Nearly ten percent of the world's population lives in low-lying coastal regions no higher than ten metres above mean sea level. Historically, giant river deltas have always attracted human settlement. These areas are characterised by alluvial soils that are constantly replenished with highly nutritious sediment from the river basin. Regions rich with such fertile soil have traditionally been favoured for agriculture and seem predestined to economically support large numbers of people. Many megacities, particularly in Asia, are located in low-lying coastal regions or in deltas. The problem is that in alluvial areas subsidence is the rule and not the exception. And in many cities, the management of this whole issue has been inexcusably negligent. We know that the ground in these regions is subject to gradual movement and deformation. It is responding to mechanical stress. Under natural conditions, alluvial soils are gradually pressed together by the enormous amounts of sediment above them and may undergo tectonic subsidence (or even uplift). In the absence of large dikes or dams along the course of a river, this subsidence is compensated for by the huge amounts of sediment coming from the middle course of the river. The sedimentary layer of the Ganges–Brahmaputra river system is, for example, 16 kilometres thick. Minor natural subsidence caused by sediment loading occurs in a quite uniform manner and is distributed over a large area. In some cases such subsidence takes place in interaction with mountains, such as between the Himalayas and the Ganges-Brahmaputra delta. On average, the rate of natural subsidence in areas with uncompacted sediment is less than one centimetre per year. Now that this Delta alone has become home to more than 28 million people, including the residents of the megacities of Kolkata and Dhaka, the subsidence caused by groundwater extraction is usually much greater than would naturally occur and we see land sinking in places by up to 20-30 centimetres per year.

Most cities are located on sites where these sedimentary layers have undergone thousands of years of consolidation. As gigantic metropolises established themselves in coastal deltas and plains, people sought to rein in these extremely dynamic natural spaces. River courses were shifted and straightened and hemmed in by dams and dikes. The consequence of these interventions today is that at many places less water is making its way to the lower course of the river. This is allowing salty sea water to push its way inland so that city dwellers have to dig deeper into the ground to pump out the fresh water they need. Such groundwater withdrawal was and still is one cause behind the sinking of cities today, with the rate of subsidence varying by location. But there are other reasons for this phenomenon. The sheer weight of buildings compacts unconsolidated soil by displacing the water found in the soil's pores.

The degree to which a water-bearing formation (an aquifer) subsides due to groundwater extraction can be measured very accurately using interferometric synthetic-aperture radar (InSAR) data. This satellite-based technique delivers elevation models of unmatched precision. By analysing superimposed pairs of radar images generated at exactly the same time (interferograms), maps can be produced that reveal occurrences of land subsidence in the millimetre, or, under favourable conditions, even in the sub-millimetre range. A well-functioning monitoring system is indispensable given that the process of aquifer compression is essentially irreversible once it has started.

It is interesting to note that some mega-agglomerations such as Hong Kong or Shanghai are today successfully managing their net groundwater extraction rate. In the centre of the Shanghai metropolitan area, with its 27 million residents at the mouth of the Yangtze River, this rate has been maintained at a constant level since the 1980s. Despite this, the land continues to sink even here. The 1990s saw a great deal of underground infrastructure work carried out in a single groundwater layer known as the Multi-Aquifer-Aquitard System (MAAS). Aquifers carry groundwater; aquitards are beds of low permeability for groundwater. Whether caused by the installation of water and gas lines, electrical cable, subway tunnels or the countless foundations for new skyscrapers, the resulting separation of water-bearing layers is a major reason for the renewed drop in groundwater levels that we are seeing today. But groundwater can escape unintentionally as well. Or it can trickle slowly into tunnel systems and thus cast out of the natural cycle. Above ground, the immense load exerted by buildings onto the soil consolidates it even further. This effect can be amplified by the vibrations generated by road traffic. Today it is quite clear that the primary cause behind the alarming sinking of the city of Shanghai since the 1990s is not the net groundwater extraction rate, but rather the underground structures built since then and all the consequences they have had on groundwater flow. But the improperly managed withdrawal of groundwater in other coastal population centres along China's coasts remains the main cause of subsidence in urban areas. More than 90 cities in China are affected, including the megacities of Tianjin and Jiangsu.

The prospects for the remainder of the century are bleak, especially for Shanghai. The sea level near the city is currently expected to rise by 43 centimetres, while expected subsidence could amount to somewhere between 3 centimetres and over 2 metres, depending on how water management and the city as a whole develop. Neotectonic subsidence could average up to 14 centimetres.

Until the 1990s, the land subsidence rate in Bangkok was clearly linked to the extraction of deep groundwater to supply the city's millions of inhabitants. More than 4500 square kilometres of land sank by over 10 centimetres a year in both the city centre and the surrounding region. Today the great weight of the city's buildings has added to the problem. The maximum rates currently seen in the city are around 2 centimetres annually. This was the reason behind the severe flooding already suffered by the city back in 1983 and 2011. Bangkok is a good example to learn from. By observing the groundwater renewal rates at different times and locations we can gain important insights for improving our water management systems.

The magnitude of subsidence seen in this metropolis has reached threatening proportions. Jakarta holds the world record here, with total verified subsidence ranging between 20 centimetres and 2 metres between 1982 and 1997 alone. Some areas of greater Jakarta will someday even sink to elevations below mean sea level. The reasons behind this worrying development are the excessive extraction of groundwater that took place until the late 1980s, the unfavourable selection of water extraction sites, the load that buildings exert on the ground as well as subordinate geotectonic factors. This subsidence combined with the rising sea levels could result in fatal flooding, since the topographic gradient or incline required for effective drainage no longer exists. The consequences of land subsidence in Jakarta are revealed in damage to buildings, in the expansion of flood zones, in lower groundwater levels and in the intrusion of salt water into groundwater layers.

Subsidence is spatially and temporally variable. At most measuring stations in Jakarta we find rates of 1 to 15 centimetres per year (1982–2010), while some locations record spectacular annual rates of 20 to 28 centimetres. There is a clear connection between construction and subsidence, although in Jakarta this phenomenon is more local in character. Of note is the link between sinking water levels and sinking land. This fact supports the hypothesis that the northern coastal section of Jakarta is subsiding due to the extraction of groundwater, in particular deep groundwater, which causes the water pressure to drop. In 1910 the groundwater level was 12.5 metres above mean sea level while in the 1970s it was at about the same level as the sea. By the 1990s it had dropped to 30 to 50 metres below sea level. These are dramatic changes with inevitable consequences.

In the aftermath of Hurricane Betsy in 1965, New Orleans raised and reinforced the levees in the Mississippi Delta in order to protect the city against such dramatic flooding in the future. Since then, however, the land in the Mississippi Delta has sunk by more than one metre. People saw what was happening, but they failed to properly investigate why. The fatal mistake, however, was in not seeing that under these conditions the levees would no longer be able to shield the city from the devastating floods of a hurricane like Katrina, which inundated nearly 80 percent of the city of New Orleans in 2005.

Santa Clara Valley (Silicon Valley), the Mekong Delta, Manila, Taiwan's coasts, Tokyo, Rotterdam, St. Petersburg, Beijing - the list of affected regions goes on and on. The construction boom taking place on the world's coastlines needs to be balanced by effective management initiatives. For some large cities such as Bangkok or Jakarta, the first step would still be to set up a spatially well-conceived water management system where management is done on a regional instead of local level and developed as part of a long-term strategy. There have been attempts to stabilise coastal cities over the short term. Shanghai, for example, used to artificially recharge groundwater reservoirs in order to limit land subsidence. In Bangkok there is evidence that the careful selection of groundwater well sites would at least help groundwater to recharge more quickly. 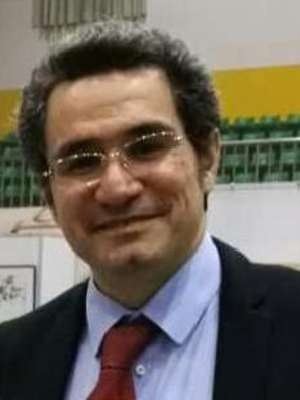 Sinkholes are a serious problem at the Dead Sea