Effects of climate change on agriculture

The Helmholtz-Zentrum für Umweltforschung (Environmental Research Centre - UFZ) is studying the effects of future climate conditions in different forms of land use.

The Global Change Experimental Facility (GCEF) is an open-air experimental facility at the field research station of the UFZ in Bad Lauchstädt near Halle/Saale. Climatic conditions expected for the future are simulated here on large plots. Higher temperatures and seasonally (especially in summer) reduced precipitation are assumed for our regions. The plots are overbuilt with a 16 x 24 m (ground area) and 5 m high structure. Due to the temporary closing of mobile roofs and sides the temperature on the plots can be increased (at night) and precipitation can be systematically trapped. This water can be reused again if required using an irrigation system and any desired precipitation scenario can be created.

It is well-known that these climatic changes can affect the functioning of ecosystems. This also includes systems used by humans such as agriculture. Comparative, systematic studies on the influ-ence of different land-use systems have not yet been undertaken, for which reason the GCEF will be investigating the impact of climate change on different types of land use simultaneously and in an interdisciplinary manner in a new scientific approach. This interdisciplinarity covers all areas of environmental research, from soil science, ecophysiology and ecology to the recording of material cycles. While individual ecosystems have been studied in previous experiments, the GCEF approach provides information on the general validity of the results found in different systems. Moreover, adjusted forecasts or recommendations for action are given for the different land use alternatives.

New knowledge about changes in ecosystems

The weaknesses of previous studies were the neglect of important processes such as interactions between species, processes in the soil and microevolutionary processes. As the experiments now being  conducted have a much larger temporal and spatial dimension, the researchers are expecting new, important knowledge about the above-mentioned aspects to be gained. This is essential for an understanding of changes to ecosystems caused by climate changes. Furthermore it is being at¬tempted to avoid the technical and experimental deficits of previous experiments. So the plots on which rain and temperature are not influenced will be fitted with identical structures in order to avoid microclimate artefacts.

The project has social relevance, as it refines the possibilities of predicting the consequences of climate change for the functioning (e.g. stability, productivity, nutrient cycles, etc.) of ecosystems in various types of land use. The findings therefore also serve as a knowledge and argumentation basis for decision-makers. As most of the types of land use under investigation are systems more or less intensively used by humans (agriculture, grassland), specific management recommendations can be made and the economic consequences quantified. The GCEF is also available as an information and educational platform. 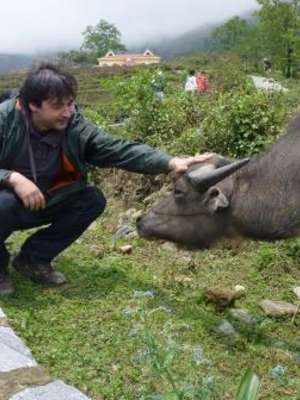