Greenhouse gases from the subsoil in Siberia are released into the atmosphere. An interview on the subject of climate research in the permafrost region. 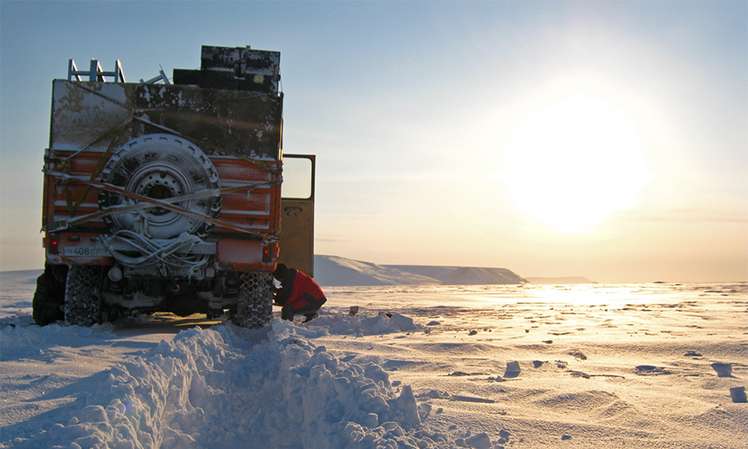 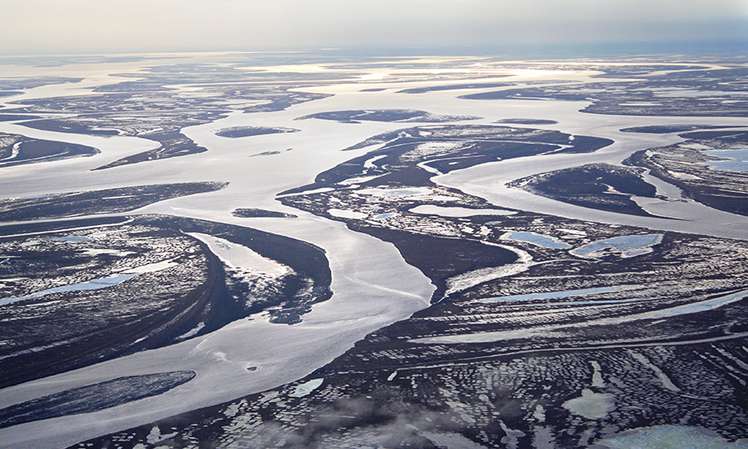 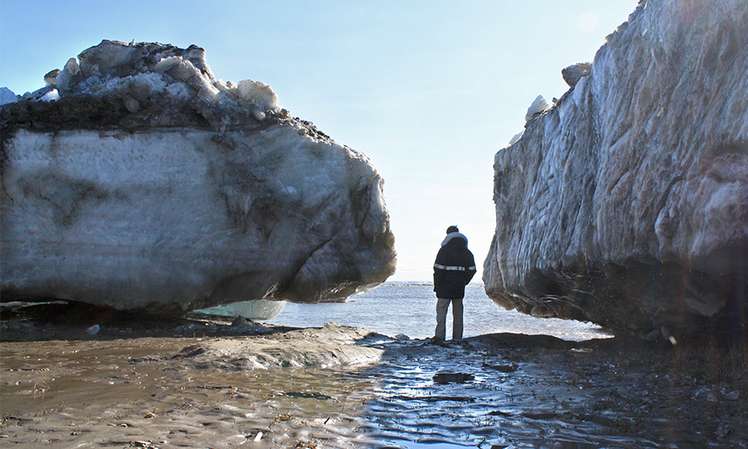 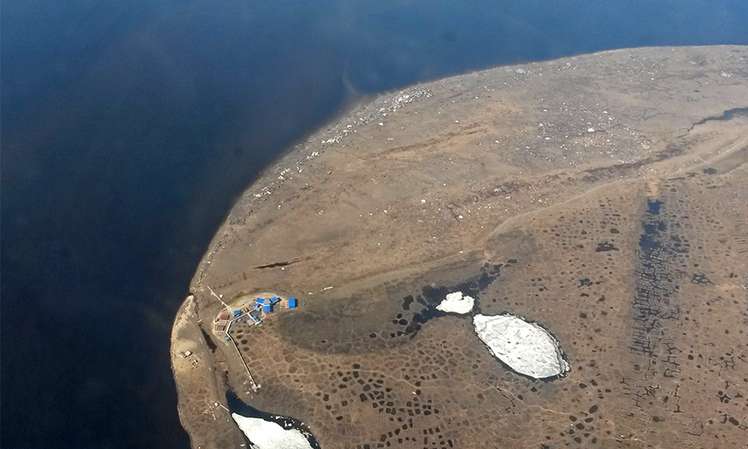 In an interview with the “Earth System Knowledge Platform“ (ESKP), Daniela Franz and Katrin Kohnert from the GeoForschungsZentrum (German Research Centre for Geosciences - GFZ) in Potsdam talk about their work in Siberia. One of the objectives: to find out how much of the greenhouse gases methane and carbon dioxide is being released from the subsoil into the atmosphere and which processes are involved.

You have carried out this year’s measuring campaigns in Siberia. Where exactly are you working?
We are working in the southern part of the Lena Delta at about 72° N, in other words north of the Polar Circle. During our expeditions, which are always conducted in cooperation with the Alfred-Wegener-Institute, we are based on the island of Samoylov, where we are using a modern Russian research station which superseded the previous Russian-German station in 2013. Part of our actual field work takes place on the island of Kurungnakh, a neighbouring island of Samoylov. We are also carrying out helicopter-supported measurements from the air. Our work focuses on the whole of the river delta.

Why is the region of interest for your research work?
The Lena Delta is the largest delta in the Arctic. It consists of a large number of river branches, lakes and islands, and thus offers strong spatial diversity. This is of great interest in particular for the helicopter-supported measurements with which we wish to investigate among other things the spatial variability in the interactions between the surfaces and the atmosphere. Furthermore, Samoylov and the surrounding area in the delta have already been well researched since the end of the 1990s. There are varied research findings which can be used to interpret our results, together with a large number of ongoing investigations and possibilities of cooperation. The research infrastructure is also very well developed and provides optimum conditions – and not least access to an exciting part of the vast Russian permafrost regions.

What research and work are you undertaking on site?
On Samoylov and in the surrounding area, various measurements are being carried out by a number of institutes and research establishments in Russia and abroad. Our junior research group TEAM has two projects this year. We wish to use them to obtain new knowledge about how much of the greenhouse gases methane and carbon dioxide is being released from the subsoil into the atmosphere and which processes are involved. The first project is investigating the exchange of CO2 and CH4 between an Arctic lake and the atmosphere. For this purpose we installed a floating platform equipped with all kinds of measuring instru­ments on the lake in spring together with colleagues from the Alfred-Wegener-Institute, the Helmholtz Centre for Polar and Marine Research (AWI). The platform is intended to remain there until late summer. Not only the gas flows but also the water temperatures and meteorological data will be recorded. In addition to pure quantification, we are above all interested in the seasonal dynamics of gas flows and their control parameters.

In the second project we wish to find out whether there are spatial differences in green­house gas exchange in the Lena Delta and how large they are. This is of interest to us because the Lena Delta has various types of surface, for example lakes, river arms and tundra. To cover large distances (roughly 100 km long) we are renting a helicopter, from which we are hanging our measuring device, the helicopter-borne turbulence probe “Helipod” of the Technical University of Braunschweig. We are using the Helipod to measure methane and carbon dioxide concentrations, wind, various temperatures and positions. During the flight we can observe these parameters live on the laptop before lengthy proc­essing of the data begins.

Do you take sample material back to Germany with you, and, if so, which analy­ses are then carried out?
The practical aspect of our work is that we do not for example take any air or soil samples, but perform all the measurements directly on site and also analyse the huge mountain of data partially on site, but mostly in Germany.

What findings are you expecting or hoping for from your stay?
We are hoping to obtain complete, unbroken data series from the lake platform and the Heli­pod flights so that we can make informed statements about the seasonal and spatial dynamics of greenhouse gas exchange. It is of course particularly exciting when one discov­ers something unexpected. But even successful measurements alone are very important, as there have hardly been any measurement series of this type in the Arctic.

How long does an expedition to Siberia last?
Our expeditions usually last three to four weeks. But as the weather must be free of pre­cipitation with good visibility for Helipod flights to be undertaken, it can also take longer for us to perform all our measurements.

How do you get from Potsdam to the Lena Delta in the first place, and how long does the journey last?
If everything goes according to plan, one can get to Samoylov in two to three days from Berlin. The first part of the journey is the easiest, because we fly from Berlin via Moscow and Jakutsk to the port of Tiksi on the eastern edge of the Lena Delta. From there, the journey continues in different ways depending on the season. In April, when the River Lena and the tundra were still completely frozen, we travelled nine hours in a truck across the ice to the island. A rather bumpy ride, but a great experience! During the second part of the journey at the end of May the ice was no longer stable enough, so that we flew to Samoylov by heli­copter. This only lasts 40 minutes. In summer, when we travel to the Lena Delta for the third time, we shall cover the last section on the River Lena by boat. The journey to the Lena Delta and back is being organised by the Alfred-Wegener-Institute, for which we would like to express our warmest thanks! 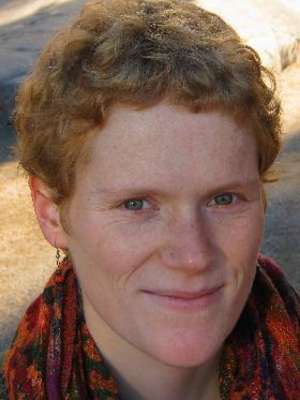 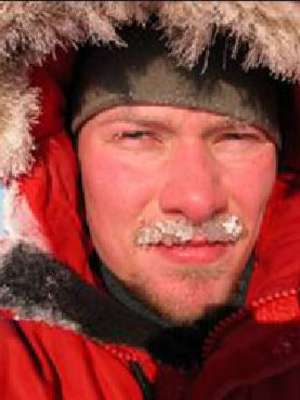 Siberia: gases are released from permafrost soil
Interaction between climate change and permafrost