To keep a permanent eye on the ocean, a global network of free drifting sondes has been set up by the international community. 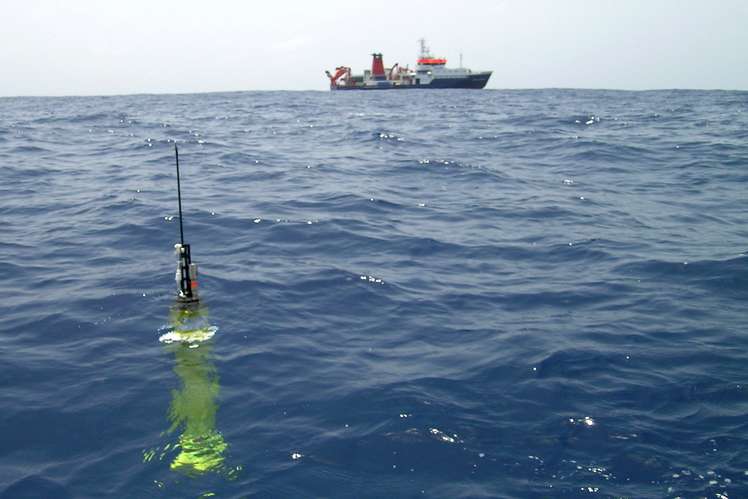 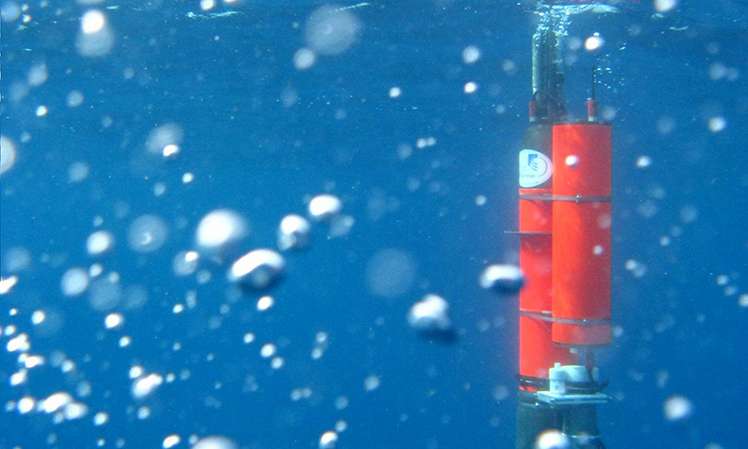 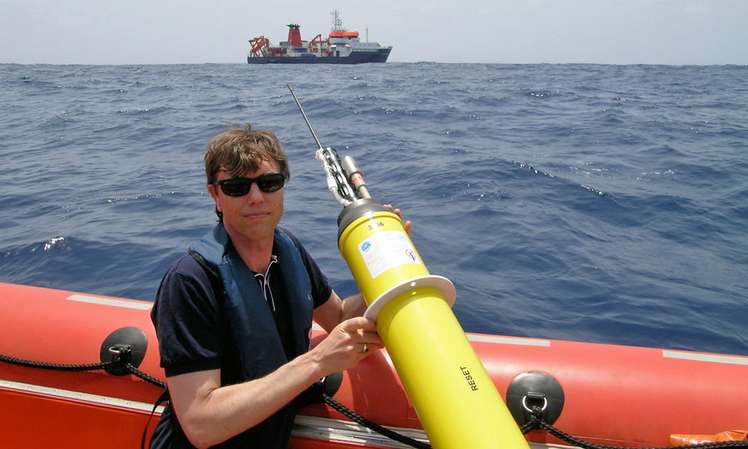 An Argo float (yellow floater), here during its surfacing and data transmission period of a few hours every ten days, is operating in the ocean to survey the vertical distribution of water temperature and salinity in the upper 2000m. (Photo: H.v. Neuhoff/GEOMAR)
Floats are autonomous measuring buoys that float freely in the ocean and transmit their measured data to their home institute every ten days. The buoy shown here carries also sensors that help to capture the biogeochemical state of the ocean, including its oxygen and carbon dioxide content. (Photo: A. Körtzinger/GEOMAR)
A scientist of the GEOMAR holding an Argo float during an expedition in the tropical Atlantic. The float dimension is about 40kg in weight and 1.50m in length. (Photo: M. Müller/GEOMAR)

All sondes measure water temperature, salinity and pressure in order to obtain a monthly picture of the ocean heat and freshwater content. The primary goal is to capture ocean warming.

The ocean covers about 70% of the earth’s surface and has mean depths of about 3.5 kilometers.  These enormous dimensions quickly show that thorough and systematic observations of the oceans have to be understood and carried out as a joint task of the international community.

A prime example for a globally operating and internationally coordinated system of measuring robots are the Argo buoys. The main task of these measuring robots is to capture the heat content and salinity of the upper 2km of the water column in a monthly resolution. This data is important for example to quantify any systematic warming of the ocean even on a regional scale, because of global warming. The system has been establishes in year 2000 and the 3000 floats which are required to comprehensively observe the upper ocean, have been reached in 2007. The millionth temperature and salinity profile was collected by the system in 2012. Germany has provided more than 600 of the robots for the international community already.

Argo buoys are constructed in a way that they drift in 1km depth with the most prevalent currents for 10 days, then start a measuring cycle by sinking to 2km depth and rise to the surface afterwards. During this process die measuring devices measure temperature and salinity. At the surface the robots send the measured data via satellite communication ashore. Argo buoys can remain in the ocean for three to five years.

Currently 3,500 of these robots operate in all parts of the world’s oceans and survey it on a grid of approximately 300 x 300 km. The European contribution to Argo is organized in the Euro-Argo Research Infrastructure where Germany is one contributor.

The "Global Ocean Observing System (GOOS)" combines a variety of different systems surveying the ocean.  Satellites, sampling the ocean surface from space, classic ships, collecting data along certain routes, as well as autonomously working measuring robots, that partially run through measuring cycles for several years and send their data via satellite communication ashore, belong to this system. The Organization supervising these activities is part of the "Intergovernmental Oceanographic Commission (IOC)", which belongs to the United Nations (UN).