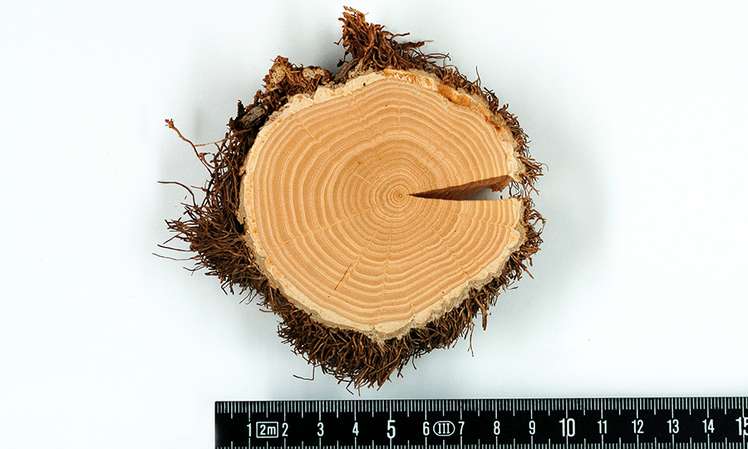 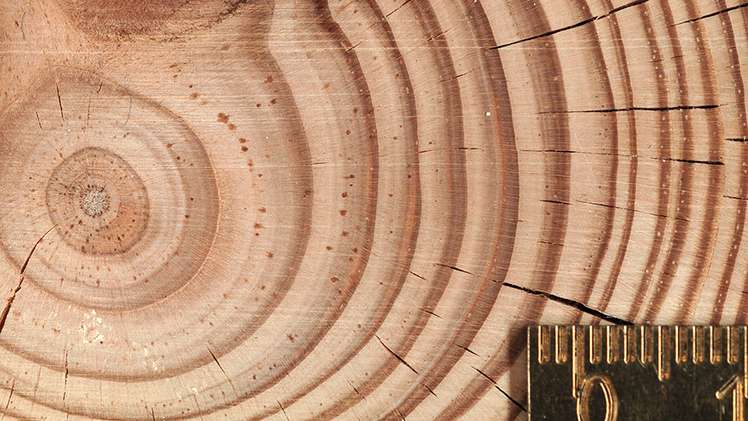 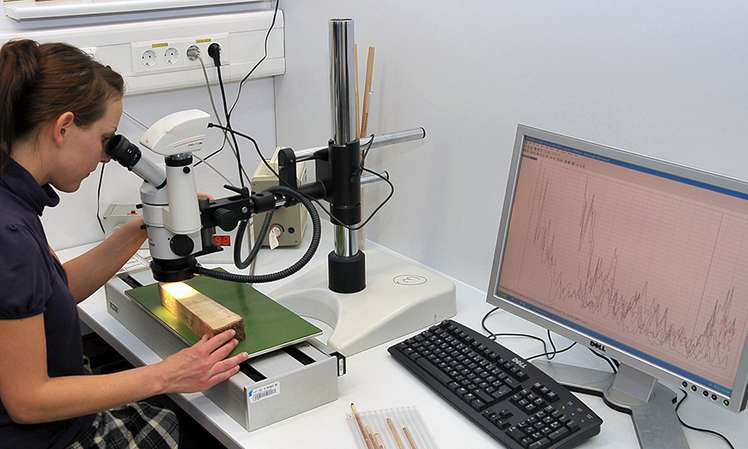 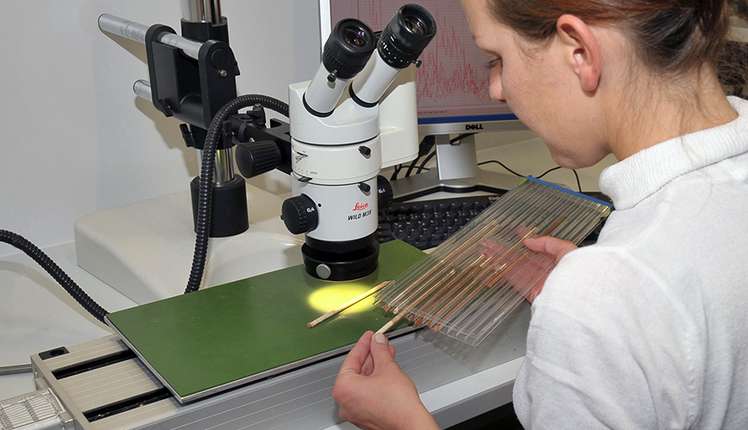 Tree ring investigations enable scientists to reconstruct past climatic conditions. The growth of a tree depends among other parameters mainly on temperature and rainfall. An annual ring of a tree in our latitudes already shows differences between spring and summer wood. Mild weather and sufficient water allow the early wood to grow more quickly, so that the wood cells are larger. On the other hand, higher temperatures and low rainfall result in more slowly growing wood with small cell structures. The late wood is therefore thicker and darker.

A detailed study of tree rings shows further influences of the environment and climate. Thickness, colour and shape together with chemical and physical properties reveal the development conditions under which the tree has grown, as, during growth, carbon, oxygen and hydrogen from the atmosphere are embedded in the wood due to photosynthesis. These conditions are preserved in the tree wood – the tree serves to reconstruct climatical data and is therefore an archive for the climate.

However, not only weather conditions but also environmental influences can be read from the annual rings. Violent volcanic eruptions have repeatedly taken place in the past in very different regions. The expulsion of ash particles into the atmosphere can lead to a worldwide reduction in average temperatures. The very fine particles in the atmosphere are also referred to as aerosols and reflect sunlight, so that it can no longer penetrate to the Earth’s surface (see also: Effects of volcanic eruptions). Aerosols can remain in the atmosphere for many years, so that the climate changes over a long time period.
Temperature drops of 0.2-0.5 °C have for example been documented after volcanic erup­tions in Indonesia (Tambora in 1815 and Krakatau in 1883) and Central and South America (Guatemala: Santa Maria, 1902; Chile: Quizpu, 1932).

Scientists of the Deutsches GeoForschungsZentrum (German Research Centre for Geo­sciences – GFZ) in Potsdam have studied the effect of 52 massive volcano eruptions within the past 1,000 years at rarely investigated depth locations in Central Europe. They studied 1128 archaeological oak and pinewood samples (annual ring width data of the Deutsches Archäologisches Institut (DAI) in Berlin) from Greifswald, Eberswalde and Saxony. In all the trees, a predominantly negative effect on growth could be verified up to four years following the violent volcanic eruptions. However, trees in higher Alpine extreme locations with temperature-limited signals show stronger growth decreases (80%) after volcanic eruptions in comparison with trees in the depth locations (60.2%). Moreover, both positive (31.7%) and negative (8.7%) growth reactions were identified after the violent volcanic eruptions at the three depth locations. If one compares the two tree species examined, a larger growth decrease is observed in the oaks (68.1%) compared with the pines (53%); in addition, only in Greifswald do both tree species show a growth decrease (oaks: 79%, pines: 73%). It still needs to be clarified whether the tree growth at the volcanic event years is only influenced by the effects of the volcanic eruptions. Furthermore, volcano aerosols in the Northern hemisphere appear to have a greater influence on decreased tree growth at the investigated locations than the aerosols of the volcanoes in the Southern hemisphere. 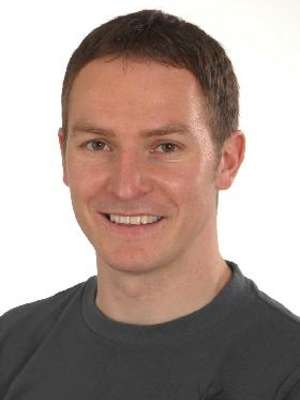