An international team of scientists took rock samples at depths up to 8800m. Research will provide valuable insight into the earth’s past. 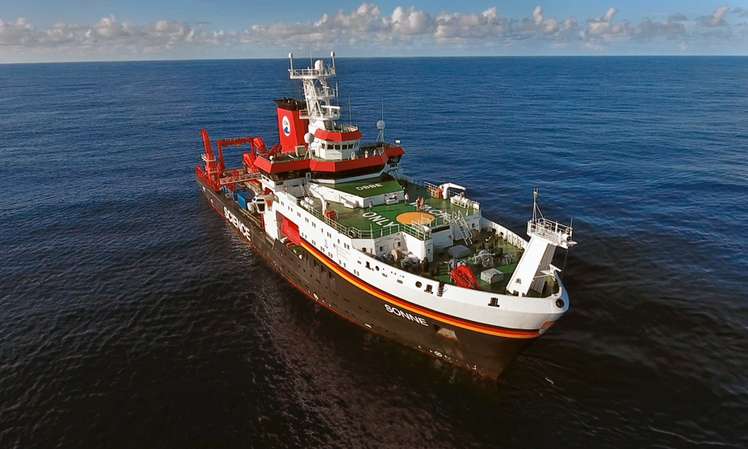 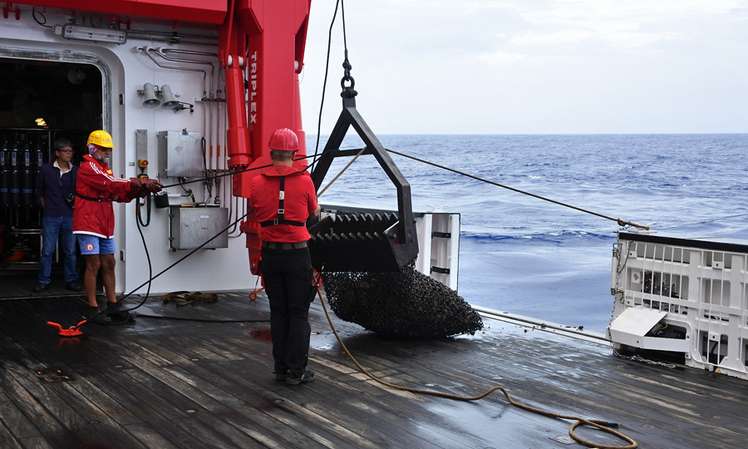 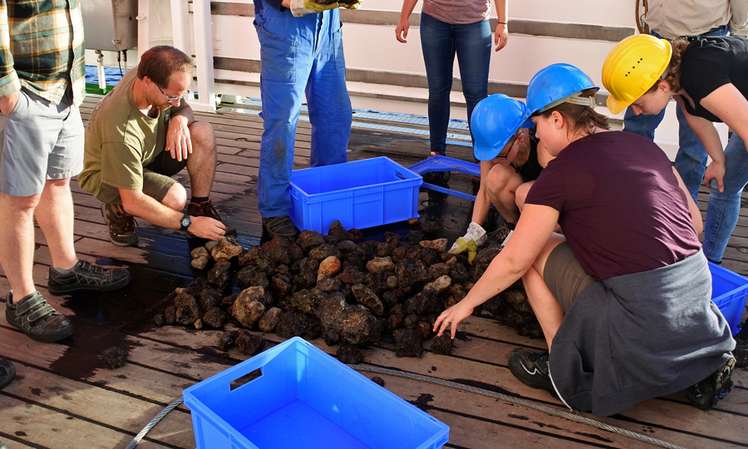 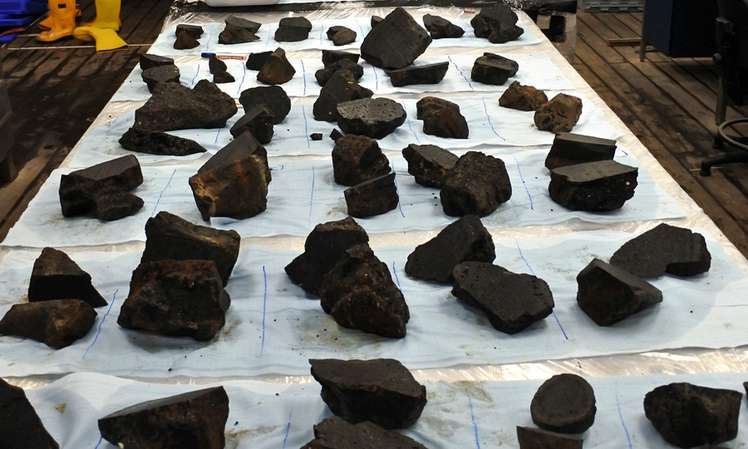 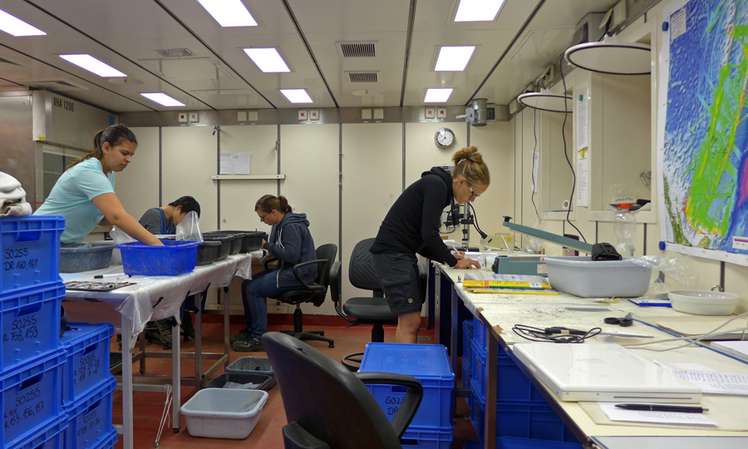 In summer 2012, a huge pumice raft was discovered floating in the ocean between the island of Tonga and Auckland (New Zealand). In the course of three months the pumice dispersed over a surface twice the size of New Zealand. Only after a period of time, researchers were able to confirm that the rock material originated from a previously unobserved submarine volcano: Havre Volcano, part of the Tonga Kermadec arc. This impressive submarine fault zone extends over 2500km in a northerly direction off New Zealand. Only a few islands along the volcanic arc give clues on the exceptionally active subsurface. More than 80 extremely active submarine volcanoes have been counted so far. The eruption column of the Havre volcano was so powerful at the time that it burst through the water surface from a depth of 1400m below sea level. To put the Havre eruption into perspective: it was ten times more powerful than the eruption of Eyjafjallajökull in 2010 which influenced air traffic all over Europe.

A large percentage of submarine volcanoes are still undiscovered, the underlying processes remain only partly understood. This is also true for the oceanic region north of New Zealand. Thus the focus of a 6-week long expedition, which was undertaken with the German research vessel SONNE (SO255 VITIAZ), was to examine the million year old Colville-Kermadec Arc with its many conical, sometimes elongated volcanoes as well as the Havre Trough. The Kermadec Trench gives important insight into when exactly the collision of the Pacific with the Australian Plate started and what forces where involved that engulfed entire mountains.

Million years ago, the Vitiaz Kermadec Arc split in half, giving rise to the Kermadec- and Colville arcs and the Havre Trough back-arc basin which formed due to a rifting process of the plates.

This active volcanic region also continues on land. The Bay of Plenty and the Taupo Volcanic Zone in New Zealand show many examples. Studies conducted by the international team of experts on the continuously widening Havre Trough will shed light onto why ancient chain of island volcanoes split up.

Which processes will lead to and influence the development of a subduction zone and what mechanisms control the splitting of volcanic arcs and the formation of Back-Arc basins? Which are geochemical and ecological impacts of hydrothermal processes in intraoceanic volcanic arcs? These are core questions of the international research mission. The research team onboard is comprised of GEOMAR scientists, researchers from Institute of Geological and Nuclear Science (New Zealand) and many other international scientists.

The active fault zone north of New Zealand is easily perceivable, even in Google satellite view. The Kermadec subduction system stretches about 1300km up to the Tonga subduction system. All along the plate boundary, the Pacific Plate subducts from a westerly direction underneath the Australian Plate. The subduction process evokes strong earthquakes and volcanism in the region. Along with the tectonic plate, seawater is subducted into the earth’s mantle. This is part of the explanation of highly explosive volcanism in this region.

This expedition is responsible for bringing to light five previously unknown volcanoes, a few of them as high as 2500m, another one displaying an immense caldera of 2 kilometers in diameter. North of New Zealand also lays the Giggenbach volcanic field. It was named after one of the leading geochemical experts for volcanic gases: the German Werner Giggenbach. In this volcanic field, the international team could sample large quantities of lava and pumice. Pumice is porous glassy volcanic rock. When magma cools rapidly during explosive eruptions, it forms rocks with a glassy matrix. High contents of gas in the magma, give rise to a highly porous structure after the gas has leaked. This explains the low density of pumice, which is lower than water. Some of the pumice shows signs of mixture of basaltic and dacitic magma which means that the rock material was still liquid at the first contact. The injection of basaltic magma into a dacitic reservoir is likely to have caused this explosive eruption which led to the formation of pumice. The international team of scientist was also able to collect such recently formed pumice.

The exact surface structure of the seafloor in this region is largely unknown. Thus before sampling, scientists were obliged to create maps in order to find suitable sampling spots. Along precise profiles researchers investigated the bathymetry of the submarine Arc with multibeam and sediment echo-sounders. In part, those maps already reveal geological processes that have helped create this volcanic region.

The valuable rocks were sampled from the ocean floor with heavy chain bag dredges. Once pulled aboard, all rocks were examined for macroscopically discernible properties as well as under the microscope. Color and texture gave initial information on whether the rock material is in fact lava, which is produced when magma slowly pours out during effusive eruptions, or pumice, which is a product of explosive eruptions. Furthermore crystals were identified as well as the ratio of crystals compared to the glassy matrix. As a result the rock type could roughly be determined.

Scientists aboard the research vessel systematically dredged along the steep slopes of seamounts. Rock samples were taken as deep as 8800m below sea level.  These dredges represent the deepest ever conducted aboard this vessel. Only Germany’s most modern and largest deep-sea research vessel allows scientists to dredge at depths beyond 6000m.  In this context even minuscule fragments of rocks of volcanic origin will be highly appreciated by scientists because it is these tiny fragments that allow geochemical analyses and possibly sound age dating once the samples are analyzed back in respective laboratories.

The findings of this expedition will give valuable insight into the past of volcanism and elucidate the development of tectonism in the region. Furthermore, the research conducted during this expedition will help to characterize the extent of volcanism and to gain understanding of the role of magmatic melt from subsiding plates in the creation of the continental crust. The ratio of isotopes (same element but different mass numbers) in volcanic rock enables scientists to give proof of formerly subducted parts of the oceanic plates (i.e. Pacific Plate) even if rock samples are found far away from their origin. Magma from volcanoes is a key to sketching the past of tectonic plates. Its composition will give essential clues about the earth’s past.