Professor Marco Bohnhoff in an interview with ESKP on the danger of a strong earthquake in the metropolitan region of Istanbul. 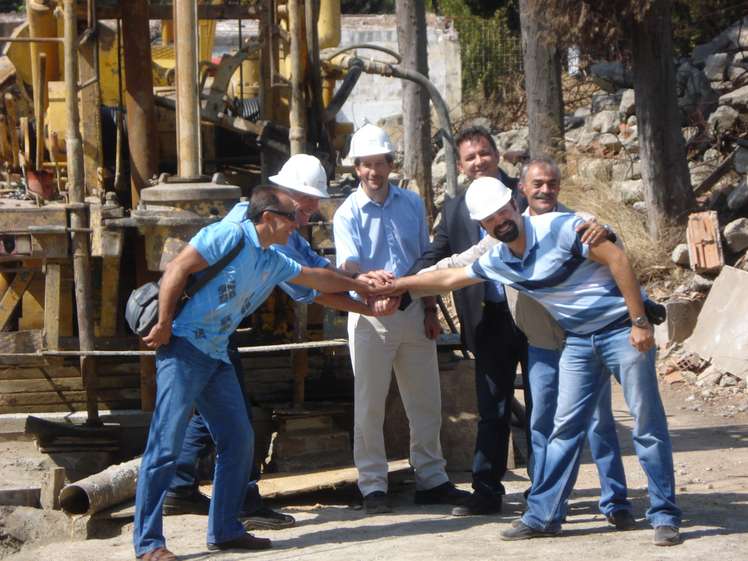 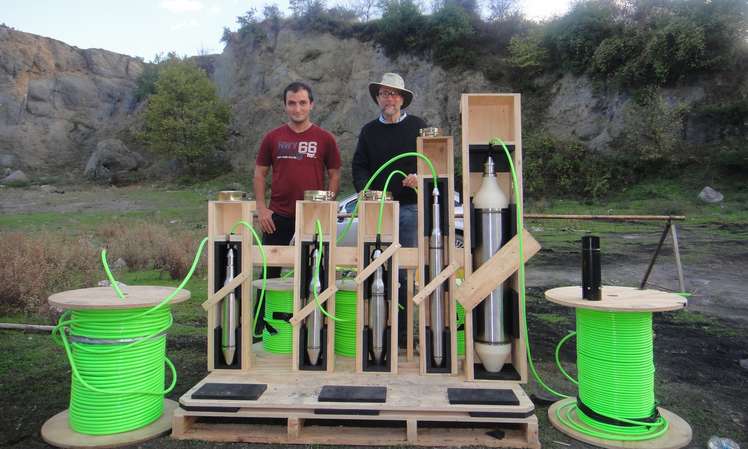 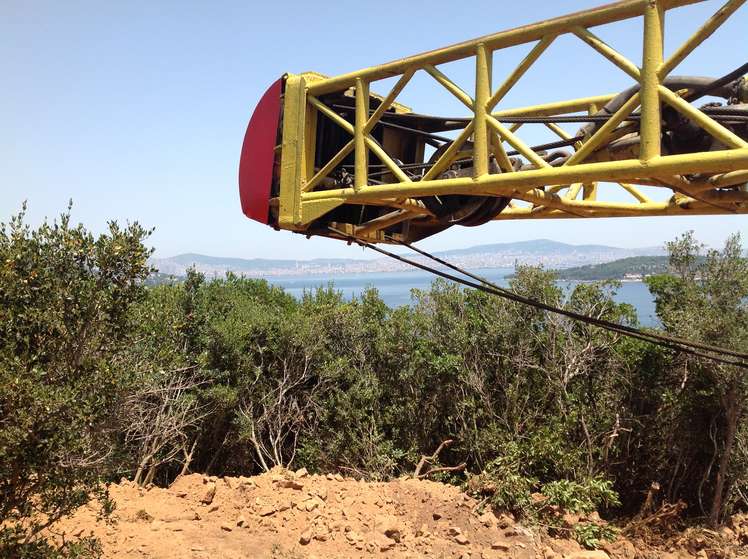 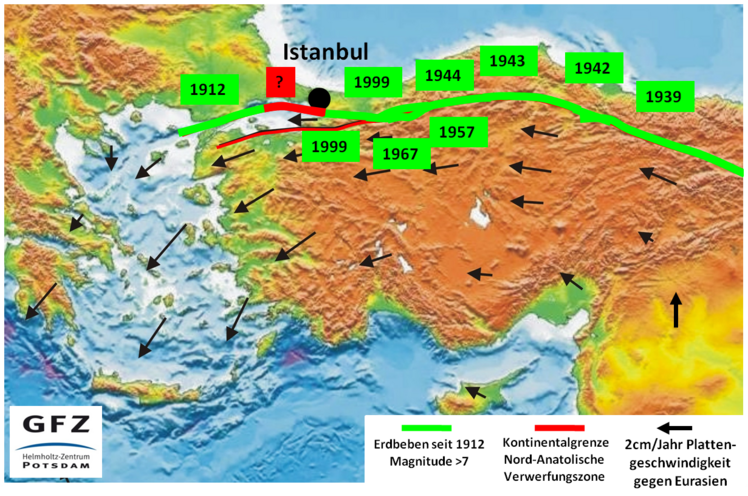 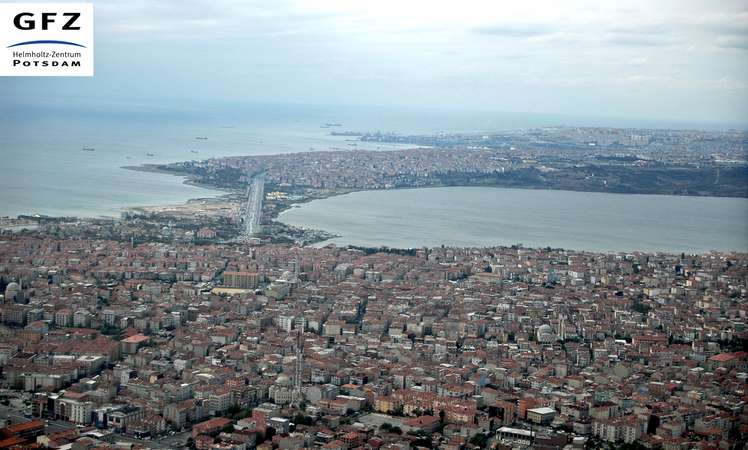 Beginning of drilling activities in the course of a project in which seismic measurements are performed to monitor earthquake activity in Istanbul and on the island of Büyükada to the south of the city. GONAF project (Geophysical Observatory at the North Anatolian Fault Zone). (Photo: M. Bohnhoff/GFZ)
Borehole seismometer before installation in the 300 m deep boreholes in the eastern Marmara Sea region. The devices are installed prior to use in a pressure and temperature-resistant steel pipe and are gimbal-mounted to compensate any inclinations of the borehole. In this way, precise conclusions can later be drawn from the recordings of ground motion at depth as to the origin of the micro-earthquakes to be measured. (Photo: M. Bohnhoff/GFZ)
Derrick on the offshore island of Büyükada before erection on the southern tip of the island. The Asian part of Istanbul can be seen at a distance of about 10 km in the background. (Photo: M. Bohnhoff/GFZ)
The Anatolian Fault Zone and the direction of movement of the Continental Plate are depicted on the map. Earthquakes repeatedly occur along the fault zone; their chronology is shown on the map. (Map: M. Bohnhoff/GFZ)
View of Istanbul, Turkey. (Photo: M. Bohnhoff/GFZ)

Violent earthquakes occur again and again in Turkey. Scientists have installed highly sensi­tive measuring devices to record even the smallest ground motions in several 300 m deep boreholes around the eastern Marmara Sea and on the island of Büyükada south of Istanbul. The scientists are hoping to obtain new insights into the physical processes which acting before and potentially during and after a strong earthquake (magnitude >7). Furthermore these measurements are intended to help to redefine and calibrate earthquake models, so as to be able to undertake a better hazard assessment for Istanbul. In this way, the researchers wish to make a contribution to Istanbul’s earthquake early warning system.

Professor Marco Bohnhoff from the Deutsches GeoForschungsZentrum (German Research Centre for Geosciences - GFZ) explains in an interview with ESKP why the earth­quake risk in this region is so high.

ESKP: The Turkish metropolis of Istanbul is sitting on a so-called powder keg. Mr. Bohnhoff, can you explain why?
Professor Marco Bohnhoff: Experts agree that we can expect a strong earthquake in the immediate vicinity of the city of Istanbul in the near future. This assessment is derived from the occurrence of several earthquakes in the course of Istanbul’s history, the ongoing conti­nental drift beneath the Marmara Sea, and the fact that an area of the fault zone which at present is showing no seismic activity is located directly off the gates of Istan­bul.

Many factors indicate that this area is currently locked. Then stresses are accumulated which at some stage exceed the strength of the rock and are then released within seconds creating an offset of both plates of several metres. The resulting seismic waves represent the actual thread for buildings, infrastructure and thus the local population. So it is not the question of “whether“, but of “how strong“ and “when“. We are trying to assess more accurately the magnitude of the expected earthquake in our research work. However, it is not possible to predict the exact time when a specific earthquake will occur in the future.

ESKP: In a study you write that the magnitude of a future earthquake in the Istanbul region will not exceed 7.4. How did you reach this conclusion?
Bohnhoff: Due to the long settlement history in Asia Minor and in particular in the Istanbul area there are extensive historical records of earthquakes in the region covering at least the last two millennia. For most of the earthquake zones on the Earth this is not the case. By analysing an earthquake catalogue compiled for the whole of the North Anatolian fault zone, we know that there have been earthquakes in the eastern part with magnitudes of up to 8.0, whereas there have been no earthquakes with magnitudes above 7.4 in the northwestern part in the region around the Marmara Sea and Istanbul. The difference may seem to be small, but, as we are talking about a logarithmic unit of measure, this is a large difference with regard to the energy released. We explain these different maximum magnitudes by the fact that the earthquake zone in the east is already fully developed (“fully mature”) and thus longer sections can be activated at the same time during one earthquake. This is not (yet) the case in the northwest and will remain so for millennia. However, in geological time scales stronger earthquakes (up to magnitude 8) will also occur at some stage below the Marmara Sea near Istanbul.

ESKP: In which timeframes can an earthquake be expected there?
Bohnhoff: Nowadays in seismology we can reliably estimate where earthquakes will occur and approximately how strong they will be. In the case of the Marmara region, this applies to a segment of the fault up to 140 kilometres long, which last produced a major quake in 1766. If one assumes that the continental plate movement in this area – measured from GPS data – is about 2 cm per year, this would mean, in the maximum case (fault completely locked), that a “slip deficit“ of up to 5 m has accumulated over the last two and a half centuries. This would then correspond as an upper limit roughly to an earthquake magnitude of 7.4, or even 7.5, but not more. How­ever, parts of the fault zone can also be creeping (in other words slowly slide past each other without building up stress). This process would reduce the total accumulated energy and thus the expected earthquake magnitude. A more accurate delineation of this process is one of the main objectives of our current research and one of the reasons why we are setting up a borehole observatory (GONAF project) around the Marmara Sea. The obtained measurement results allow us to produce a much finer image of the processes currently taking place at a depth of several kilometres, which otherwise cannot be analysed in such detail.

To better estimate the timeframe in which an earthquake is imminent, probabilities are used. For the Marmara earthquake, the probability for an earth­quake of magnitude 7 or higher within a time period of 30 years was 35 - 70% in 2004, according to a study by Tom Parsons of the US Geological Survey. In the meantime this probability should have been increased slightly. However, with today's knowledge to predict the exact time when an earthquake will occur.

ESKP: Which areas besides Istanbul are affected?
Bohnhoff: The whole of the region around the Marmara Sea.

ESKP: What damage can be expected from an earthquake of such intensity?
Bohnhoff: In general, the best protection from earthquakes is a safe construction method. Regarding the damage to be expected, first of all it makes a large difference on which type of ground buildings are constructed. The more consolidated the better (best of all on granite). On soft ground, such as drained sediments (sand, clay) or lagoons, strong ground motion amplifi­cation, partly in conjunction with liquefaction, can occur. The mechanism is comparable with moist sand on the beach; if one taps again and again on the same point, water accumulates and the substrate becomes unstable.

The southwestern part of Istanbul unfortunately is located on such a drained lagoon, where the amplification effects are presumably greatest. The international airport, for example, is also located here, so that in the event of an earthquake this could also make it more difficult to fly in rescue teams. 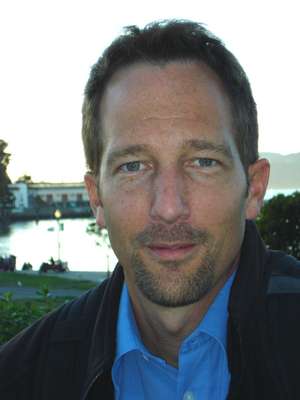 Questions and answers on the subject of earthquakes