In the dry year 2018, newly planted trees died in many cities and communities in Germany. Also established and older tree populations in cities are exposed to growing stress, which is associated with heat, drought and pollution. These stress factors are often compounded by incorrect tree management. In the first part of the ESKP interview, Dr. Somidh Saha from the Karlsruhe Institute of Technology (KIT) calls for better tree registers to cover all urban trees.

Mr Saha, we are currently reading in the media how badly forests in Germany are doing. What is the particular situation in cities?

Dr. Saha: Urban trees and forests are also suffering a lot from the climate change impacts in Germany. For example in Karlsruhe, the city where I do research, 30% of young trees which were planted from 2014 to 2017 were succumbed to death by the drought and heatwave of 2018. Tree planting in urban areas costs ca. 2000 Euro per tree on average in Karlsruhe region or sometimes more. So you can imagine also the huge monetary loss due to death of newly planted trees in urban areas in Germany.

What stress factors are trees exposed to in cities?

Dr. Saha: Urban trees are exposed to varieties of stresses as they grow in manmade artificial ecosystem. The main direct stressors are: heatwave, drought, and diseases. The indirect factors are pollution as well as improper management (e.g. lack of root growing space). They are regularly exposed to air and soil pollution. Urban trees are also prone to mechanical damage due to human activities and they sometimes do not receive enough sunlight in the urban quartiers with high raised building. We are currently investigating how these multiple stressors influence the vitality of urban tree species.

What particular trends can we see in Germany?

Dr. Saha: Describing exact trends is difficult. A Google search using term “absterben stadt bäume” will result many recent news on urban tree dieback in German cities in media. However, a concrete nationwide statistics on the magnitude and frequency of urban tree dieback is hard to find. It signifies the importance to develop a national network to monitor the health of urban trees and forests in long-term.

Let’s please first have a look at city trees in general: Why do we actually need trees in cities, why are they that important?

Dr. Saha: Let me start with a short explanation of the term for better understanding. Trees growing in single, cluster, or patches in parks, roadsides, courtyards, graveyards, gardens, business districts, city centers, and urban woodlands within an administrative boundary of city are regarded collectively as “urban forests”.  From now on, I will use the term “urban forests” which will cover both urban woodlands and urban trees.

How do trees reduce stress that people experience in cities? What is the connection between green spaces and the physical and mental health of people? Can you give examples for scientific findings?

Dr. Saha: Urban forests are essential for human wellbeing in urban areas. Urban forests are key place for recreation in the cities. Urban green spaces are place for social and cultural gathering of residents where they exchange ideas and socializes. Green spaces reduce mental stress and fatigue. A recent study from the KIT researchers (I was not involved) had found neurological evidence that urban green space can reduce psychiatric morbidity among humans (Toast et al., 2019; Nature Neuroscience).

How do urban forests contribute to cleaner air?

Dr. Saha: Leaves have small pores on their surface which are known as “stomata”. The stomata pores uptake some gases like nitrogen dioxide, sulphur dioxide, carbon monoxide, or ozone, and then those gases diffuse into intercellular spaces. After diffusion, gases are absorbed by water films to form acids and react with inner-leaf surfaces. Trees can also remove pollution by intercepting airborne particles. Some fine particles get absorbed in the tree but majority get re-suspended to the atmosphere, washed off by rain, or dropped to the ground with fallen leaves, branches and twigs. Therefore, trees are only temporary retention site of the atmospheric particles.

From a scientific point of view, are there any findings to which exact extent trees in cities cool the urban climate? Even in green cities, the problem of heat islands has long been a major issue.

The changes in this bioclimatic variables can reduce temperature in summer months. For example, in the city of New York, one percent increase of tree canopy cover can reduce maximum mid-day air temperature during summer by 0.04 °C to 0.2 °C (source: the US Forest Service). The reduction of air temperature by the tree can improve overall air quality because the emission of many pollutants and/or ozone-forming chemicals are temperature dependent.

Are there any tree species that are well known for their extraordinary cooling effect (high transpiration rates) while dealing well with temporary droughts?

Dr. Saha: This is a very good question and we are currently trying to answer it through our research! Theoretically, trees with high transpiration rates are susceptible to drought due to a physiological process called xylem cavitation. In Germany, Tilia cordata (linden tree) is a species that is known to reduce air temperature. However, the species tolerance to drought is only moderate.

What is your biggest concern with regard to particular stresses are urban trees exposed to?

Dr. Saha: Drought, heatwave and diseases are most important stressors in German cities.

What can local authorities do to preserve, maintain and strengthen trees in cities? What lies in their hands?

Dr. Saha: Each urban trees should be marked and permanently monitored. Many German cities have Urban Tree Registrar or Baumkatasterfor this purpose, which is already a very good initiative. However, City Tree Register’s often record trees growing in public spaces. Trees growing in private properties are not properly documented. Moreover, trees growing in places like religious places (e.g. church owned properties, cemeteries etc.) are not often recorded in City Tree Register. In Karlsruhe, we have currently ca. 354000 urban trees. However, only ca. 136000 trees are being monitored in the Baumkataster by the City’s Garden department.

What else could be done to improve the situation?

Dr. Saha: I would like to suggest promoting citizen science networks to record data on trees growing in private properties. We should also try to digitalize and harmonize urban tree data which are being collected by different authorities in one city while developing a basic and common and defined data recording format for all authorities as well as citizens.

Part two of the interview with Dr. Somidh Saha from the Karlsruhe Institute of Technology (KIT).

Text, photos and graphics unless otherwise noted are under license of: eskp.de | CC BY 4.0
eskp.de | Earth System Knowledge Platform - knowledge of eight research centres of the Helmholtz-Association. 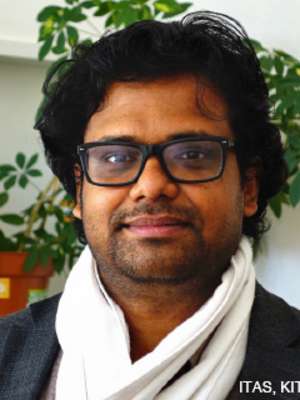